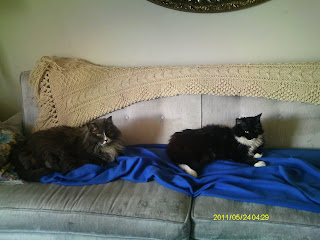 Here's a sight you don't see every day. In fact, Mom had never seen it before.  Mom had been reading in the easy chair next to this couch.  Emma crawled all over her for a while, then went to the couch.  I joined her there.  We even stayed put while Mom went and got the camera.

Emma:  It's a good thing she got the camera when she did.  I jumped off the couch right after the picture was taken and Herman followed in a couple of minutes.

Karen Jo: This is the first time that I have ever seen the two of you so close together, just chillaxing.  You usually only get this close when you are both in bed with me.

Emma:  Bedtime is the best time.  I even groomed Herman's head a few nights ago.

Karen Jo:  That surprised me, too.  I think the two of you are beginning to really like each other.  Herman was fascinated with Emma from the very beginning, but Emma was scared of Herman at first.  Then she began to tolerate him.  Both of them have displayed jealousy of the other. Now the ambushes and whaps are much more playful.

The Purina One is all gone.  I am going to miss it.

Karen Jo:  You missed it so much that you even started munching on the Green Pea and Duck again.

Emma:  I tried the Green Pea and Duck, too.  I would still rather have the Fancy Feast Filet Mignon.

Karen Jo:  I know that you would, but give the grain free food a chance.  It is much better for you.

We don't care about that.  We want food that tastes good.

Karen Jo:  Well, I know that neither of you is starving.  You aren't even finishing up all of your Stinky Goodness all the time.

Sometimes we forget about the bowl in Emma's room.

Emma:  I'm very glad that you still put food in it, though. Sometimes Herman hogs the food in the kitchen.

You try to hog the food sometimes, too.

Emma:  Yeah, but you're bigger, so it's harder for me.

Karen Jo:  OK, that's enough of that.  Mostly, these days, each of you chooses a bowl, either the Medley or Stinky Goodness and eat side by side.
Posted by Karen Jo at 1:04 AM

You two look like you are really settling in - all kitties have their own timetable.

Hannah said what I was going to say..The Bickersons. MOL

Ha, we love Hannah and Lucy's comment...Yes, the Bickertons. LOL. You're getting along like normal siblings/family members! :-)

I am glad you are starting to like each other. Emma, he is a boy and boys are different--I know I have to put up with Ichiro.

That is the best picture ever, Herman and Emma! We're smiling really, really big over here! :)

That's a nice picture of both of you together!!

Why is it after we visit you, we are always hungry?? Must be all that talk about foods!!

We're glad you are starting to get along!

I am so glad that you two are getting along so much better. Also the two of you together make a very good picture. We want to thank you so much for stopping by and giving your sympathies for Red Facey.

What a wonderful surprise to see both of you together!

glad to see you two beginning to team up...

Wow, you guys get difernt foods at the same time? That would make us all hissy about who got the "better" stuff.