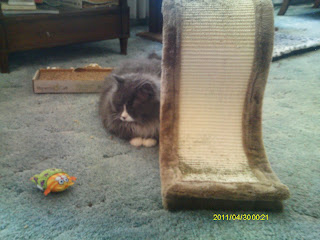 I like to sort of hide behind the new scratcher, so Emma can't see me watching her.  It's easier to ambush her this way. 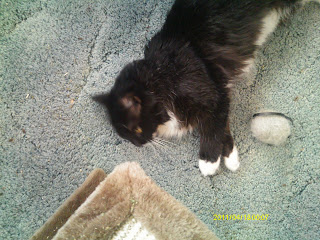 Emma:  I just finished playing with the Wooly Bully and now I am relaxing a bit.

Karen Jo:  I think both of you need to relax a bit more.  You have both been very cranky kitties this week.  What has been bothering you so much?

I want more open windows.  The house smells stale, but you hardly ever open the windows.

Karen Jo:  It has still been windy and cold.  I did open up a few windows for an hour or two before I went to work today.

Emma:  I want more food.  You feed us breakfast early, but then we don't get any more until you are nearly ready to leave for work and you don't come home and feed us again for hours and hours.

Karen Jo:  You don't need any more food.  Herman is already too fat and you are getting a little pudgy tummy.  There is plenty of dry food available all the time.  If Herman doesn't start losing some weight soon, I may have to cut down on the dry food.

Karen Jo:  Now what is bothering you about each other?  Herman, the other night I was playing ball with you while I was waving Da Bird for Emma.  Everything seemed to be going so well, but you stopped playing ball and soon pounced Emma, making her squeal and hide.

When she is lying on her back and waving her paws around, sometimes I just can't help but want to pounce her.  Besides, when you play with me I want you to only play with me and not play with Emma at the same time.

Karen Jo:  Emma, you were especially grouchy yesterday.  I was doing the laundry and I knew that both of you were near my feet, so I shuffled my foot instead of taking a step, but I pinched Herman's toe anyway.  Herman yelled and both of you ran as fast as you could to the living room.  I started petting Herman to apologize for hurting him and you started making angry noises and hissing at him.  I had to move to the couch to calm you down, then go back to Herman to make sure that he wasn't hurt.  What was that all about?

Emma:  When we ran to the living room, Herman was chasing me as hard as he could.  He scared me.

I wasn't chasing you.  I was trying to get away from Mom's clumsy feet.

Karen Jo:  Later, it was furmination time.  Emma, you let me give you a light going over before you started biting the furminator so that I couldn't continue.  Herman, you were more cooperative, but just barely.  I know that you would rather just be brushed, but the brush won't keep the mats away.  I started to go under your chin and you let out a yell and scratched me.  Emma, you jumped up on your carrier, then pounced on Herman's head, which caused quite a ruckus.

I had a mat under my chin and I didn't want it getting caught in the furminator.  I didn't really hurt you much.

Emma:  Herman gave out an attack cry and I was trying to protect you, Mom.

Karen Jo:  I appreciate the thought, Emma, but I really don't need protecting from Herman.  I understand about the mat, Herman.  I am glad that you let me get it with the scissors.  It's great that you aren't so afraid of the scissors now.  Both of you seemed to be in much better moods tonight, so maybe we won't have such grumpy kitties now.
Posted by Karen Jo at 1:33 AM

We love your conversations with Karen Jo! I think there must be a touch of spring fever happening in your home. Soon the weather will be better and you can have lots of fresh air.

Could there be a bit of jealousy going on around your place now and then you think? Hope you two can enjoy some open windows soon and enjoy playing together. All of you have a great weekend. Hugs and nose kisses

You two really are doing so very good and I'm so proud of both of you!

Cranky Cats for sure! Karen Jo, consider yourself lucky you don't live with Felix...he's a cantankerous kitty nearly 24/7. But we love him anyway!

We all get starch in our britches when the weather changes.

Pretty much sounds like regular life at my house! I think you two kitties are still getting to know each other better.

I know I have already said that Mom and I love your conversations..all three of you. It's always a joy to read.

Yeah...it's the weather...that's what our mom says...because we've been kinda grumpy too!

Yep, I think it's the weather too. Feeling cooped up can make anyhone feel cranky. It's hard to get along sometimes! Just ask my brofur!

Some days are better than others here too. Yesserday we were all lovey dovey nappin together. But there was a bit of hissing and whappin going on today.

We're sure glad we dont have fur issues though. That would get us hissyer.

I think being cooped up makes everyone a little grumpy. But it does sound like you two are getting along pretty well.

Happy Mother's Day to your mom. :)