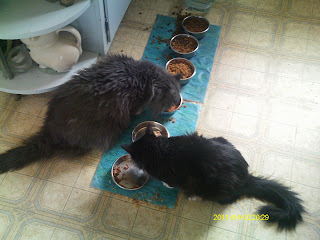 Mom likes this picture for two reasons:  it shows how we have learned to eat together and you can clearly see the size difference between me and Emma.  Mom hasn't blogged for nearly a week.

Karen Jo:  There has been a lot going on in my life lately and I just have been to tired to blog.

Emma:  There has been a lot going on in our lives, too.

Karen Jo:  Yes, there has.  Herman jumped you last Saturday.

Emma:  He was mean to me.  I was just getting petted and he grabbed me with his forepaws and threatened to bite my head when you finished.

Karen Jo:  Herman was always the one who got petted in the bathroom before you came.  He just got a little jealous.  When are you finally going to stop hissing at Herman?

Emma:  When I get good and ready.  I hardly ever do it any more, just when he gets too close to me and I don't feel like dealing with him.

Karen Jo:  He knows that I will pet him while I am talking on the phone.  You weren't close enough for me to pet and he wanted to get close to me and you hissed at him.  He backed off and I couldn't pet either one of you.

At least she didn't jump me last night in bed.

Karen Jo:  That was all good.  I figured out how to pet both of you at the same time.  It was all going very well until you decided to leave.

I suddenly discovered that her rump was touching my rump. That disturbed me and I left.

Karen Jo:  You like sniffing her behind, so why would it touching you upset you?

Emma:  I sniffed Herman's behind, too.

Karen Jo:  Yes, both of you seem to get a kick out of sniffing each other's tails.  At least it doesn't lead to hissing any more.

Emma:  I am learning how to play with toys.  The other night, Mom was rolling a ball to Herman and he was batting it back.  I sat and watched.  They played like that for a while, then Herman stopped playing.  Mom rolled the ball to me and I batted it back a few times.  It was fun.  Yesterday I smelled something good in one of the toy boxes.  I dug and dug and found it and dragged it out.  I sniffed it and bit it and clawed it and kicked it.  Then I ran around the house like my tail was on fire.

Karen Jo:  You discovered Herman's nip syringe.  It is stuffed with really good nip.  I will leave it out for you until you get tired of it.  I am so glad that you are discovering the fun of cat toys.

Emma:  When can I go out in the stroller again?

Karen Jo:  Some day when I am off and the wind isn't blowing so hard.

Karen Jo:  Yes, Herman, but not at the same time.  The stroller isn't big enough for both of you at once.
Posted by Karen Jo at 2:04 AM

Labels: getting along, toys

It sounds like you two are adjusting - it's a process!

See Herman, I told you sisters can be really cool...just keep trying, you both are doing great!

You are lucky having a lady cat in your home Herman - she will tidy up after you!!
luv Hannah and Lucy xx xx

Sure glad to hear that you two are sort of becoming friends. I am sure that soon you will appreciate having a kitty friend. Hope all of you have a fun week.

Glad to hear you are adjusting to one another...a few squabbles are to be expected...

I am glad you two are getting along better.

Playing is also a lot of fun, and I am glad you are learning to play, Emma. I like body slamming Lucky, but mom doesn't like it when I do that.
lol.

We love the buffet photo!

We are glad you are starting to get along better! That is always important!

There's been hissing and nastiness here lately, more than normal. Mom is blaming it on spring and she hopes it ends soon. But it sounds like you two are still doing really good!

Well, it will take some time, but we think you two are doing pretty good together. You just hafta learn how to share your mom.

We love all the stuff about you getting adjusted ta each other, but we are fall-on-the-floor about that line of food bowls!!!

We would bite our on ears ta have THAT MUCH food available! We know WHY there is all that food, but we are still pawing at the picture...

We like that picture too. :-) Emma, remember to be nicer to Herman. It's always good to have a big brother!

I do find it hard to share my Human as well, I must admit. But I also think it would be nice for you two to be friends. It does sound like you both are doing pretty good in getting used to each other though. My Human sends you both purrs, she likes your floofs.

Herman & Emma
I still fuss at Boo when she gets to close to the Mom purrson. The Mom purrson belongs to me and me only.

Stroller that sounds like a lot of fun. We'll have to tell mom to get us one.

That's quite the super buffet you got going there!