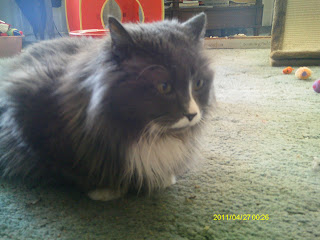 We have totally learned to share Mom in bed.  Now that we don't have any problems lying right next to each other, we can each get a petting hand at bedtime.  We both love it.  Other kinds of sharing don't always come so easily. 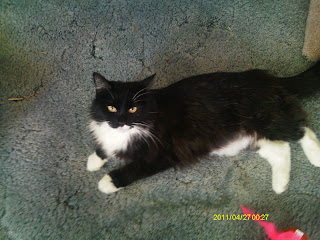 Emma:  Herman was mean to me yesterday.

You were playing with my favorite toy and I wanted it.

Karen Jo:  Herman, you have 12 or so of those favorite toys.

But you only get them out one at a time.

Karen Jo:  You still didn't have to whap Emma over it.

You were tossing toys to Emma and she was playing with all of them for a little while, then waiting for the next one.  The last one you tossed her was one of my favorite balls.  She was playing and playing with it.  I decided that I wanted it and I whapped her.

Emma:  I hissed at you, but then I jumped up on the sofa to get away from you.

That was exactly what I wanted to happen.  I got the ball and started playing with it.

Karen Jo:  If you had waited for another minute or two, Emma would probably have stopped playing with the ball and you could have had it without whapping her.

But I wanted it right then.  I didn't hurt her or anything.

Karen Jo:  At least you mostly get along.  You got Emma to play THoE with you this morning.

That was fun.  I chased Emma down the hall into Mom's bedroom.  Then I crouched down at the foot of the bed and started teasing Emma with my paw, waving it at her.

Emma:  I crouched down at the side of the bed and started doing my wiggle-butt.

When I saw Emma was ready to pounce, I started running up the hall.

Emma:  When I saw Herman running, I chased him all the way up the hall.  I like it that I can chase him now sometimes and not always be the one being chased.

I had been trying to get you to chase me back for weeks.  It just took you a while to catch on that chasing me back was part of the game.

Karen Jo:  I love seeing Herman and Emma playing together.  Emma has been so good for Herman.  He has even started playing with his toys by himself again.  He had stopped playing unless I played with him and even then his interest flagged quickly.  Now he will sometimes spot a ball and start batting it around and chasing it.  Tonight he even joined in playing with Da Bird.  They weren't trying to catch it together, but I would swing it near Emma for a while and let her play with it, then I would swing it near Herman and he would play with it, too.  He hasn't played with Da Bird in a long time.
Posted by Karen Jo at 1:37 AM

Having Emma around is doing you so much good, Herman! You should not mind her playing with your favorite toys now and again.

(Okay, I would have gotten annoyed too!)

Emma is making you feel like a young mancat again Herman - we love hearing that you are playing together.
Luv Hannah and Lucy xx xx

It is sweet that you are both getting on the bed with your mama. Now, Herman I bet if you share your toys you and Emma will be having a ton of fun. You two are getting along better every time we stop by to visit. Keep playing together and share, share, share! Hugs and nose kisses

Awww, that is soooo sweet! Even with The Horde, they all have special pals to play and groom with. I bet you see some ear washing pretty soon!

It's great to see you getting along so well! Even with a whap here and there.

We're so happy you two are doing well together!

It is fun to share play time. The boys tend to run over Angel when it is her turn!