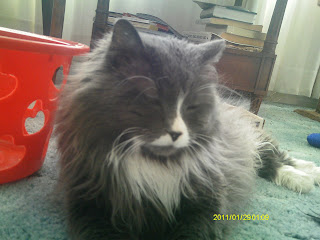 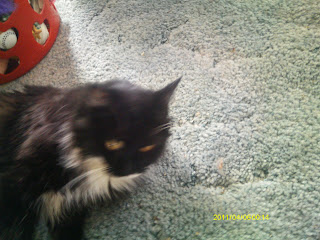 We are both hanging out by one of the toy baskets, but at different times.  Today was cold, very windy and rainy.  For some reason, it brought out the playfulness in us. Emma woke Mom up really early for breakfast, so by the time Mom got up for real, after some petting for both of us, we were ready to rumble. By the time Mom got dressed, I had chased Emma up and down the hall three or four times.  While Mom was cooking her lunch, we were running all around the living room.  We were running around so much that Mom didn't get a chance to brush either of us.

Emma:  Mom got me my own brush and I get brushed now, too, when Mom can catch me.  I don't like it very much, but I tolerate it for a while.

Karen Jo:  I almost didn't get a chance to give Herman his Prednisol.  He would much rather play with Emma than let me put it in his ear.  By the time I went to work, both kitties were calmed down.  Herman was all stretched out on the floor and Emma was up on the big pillow on the table, watching the rain come down.

When Mom got home from work, we demanded to be fed, ate, then started up the chase games again.  I chased Emma into the kitchen really fast, then slid across the floor, trying to turn when she dodged under the kitchen table.  Somehow, she can turn on the linoleum much better than I can.

Emma:  I am a lot lighter than you are, so I don't slide as much.  I hid under the kitchen table until Herman got tired of waiting for me to come out.  When he went into the living room and lay down to relax, I ran right by his nose and the chase was on again.

Karen Jo:  Emma really does run by Herman, really close to him, to get him to chase her.  She enjoys the game as much as he does.  The toys were all scattered around from where I left them when I went to work.  I don't know if they are playing with them, or just running over them and kicking them by accident.  At least I know that they aren't just sleeping the whole time I am gone.  Herman has his old spot back when I go to bed at night.  Emma seems to prefer the rocking chair.  She joins me early in the morning, gets me up for breakfast, then comes to bed again for petting.  Sometimes Herman jumps up for early morning petting, too, and sometimes he doesn't.  When both of them are there, one usually gets on one side of me and the other on the other side.  I lie on my back and pet both of them at the same time.  There have been no more spats.  I have seen Herman in pounce position, watching Emma, so many times, but he never actually pounces her.  He just runs out and chases her.  I hope to see kitty wrestling some time, but with the huge size difference between them, it may never happen.
Posted by Karen Jo at 12:51 AM

It sounds like you two are really enjoying each other's company now! Paws up!

Emma, we think you are helping Herman a lot!

It sounds as though Herman and Emma are enjoying a good playtime while you are working Karen. We are delighted they are getting on so well and enjoy playing with each other. It sounds as though Emma has got Herman organised at playtime.
Luv Hannah and Lucy xx xx

We're so glad you two are getting along better! Playing chase is so much fun!!

It looks to us as if a lot of fun is going on at your place. Keep enjoying those chases and petting. Have a great Sunday! Hugs and nose kisses

I'm so happy you two and getting along, that makes my whiskers grin up! Enjoy your Sunday!

It makes it easy on Mom when we all get along here. Looks like you all are getting pretty good at it!

It is so good that they are playing together!

Are you guys playing thoE??...How fun is that!!...We know you guys are going to best friends soon, cuddled up and resting together too=we can't wait to see those photos!...Happy week ahead, sweeties...xoxo...Calle, Halle, Sukki

We are glad you two are having a grand old time!

Herman
We are so glad that you and Emma are enjoying each other so much.

We are so happy that you two are having so much fun together! :)

Purrs and headbonks to you both, and to Mom Karen Jo, too!