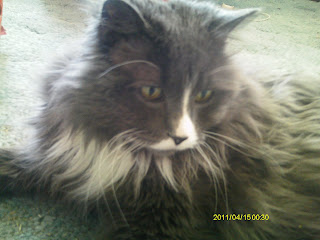 I am watching Emma play with Squeaky Mouse. 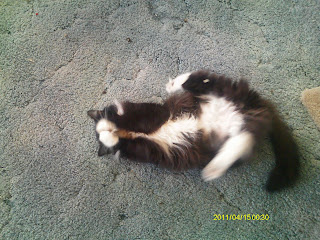 Emma:  I am playing with Squeaky Mouse.  I had never seen this toy before.  First Mom tossed out a ball from a toy basket and I batted and chased it until it went into a corner.  Mom got it out again, but I had lost interest.  The she tossed out this fevver-butt mousie and it squeaked.  I pounced on it and played and played with it.  Mom tossed out some other toys for Herman, but he would rather watch me play than play himself sometimes.  Mom hasn't cleaned up the nip from the carpet yet and I roll in it every day, then run around like crazy and play and play.  Mom wanted to play with me with Da Bird tonight, but she couldn't find it at first.  I had dragged it off the couch under the corner table to play with it by myself.  When she found it, I played and played with it.  Herman just watched.

Emma:  Herman was mean to me tonight.

I was not.  I just threatened to whap you when you stuck your nose in my Medley dish while I was eating.

Emma:  But you let me share the last time I stuck my nose in the Medley dish.

I didn't feel like sharing tonight.  You got your own food.

Emma:  Mom did put some good Stinky Goodness in my dish in my room and I ate it all up.  You didn't even finish your Medley.

I left some for you.  I just didn't want you trying to eat it while I was eating.  I wanted to eat as much as I wanted without your help.

Emma:  I beat you to bed last night and got some bedtime petting.

You were smart enough to switch to the rocking chair when I came to bed.  I got Mom for the rest of the night.

Emma:  I got her this morning.  I got her up for breakfast, then got some more petting time before she got up to stay.

I got a little morning petting, too. I was cuddled up behind her knees while you were getting petted.

Karen Jo:  Getting up around two cats is getting to be a bit of a challenge.  I really enjoy it, despite the occasional awkwardness.  Emma, you are taking your early afternoon nap between the bed and the bookshelves every day now.

Emma:  I like it there.  It's relatively dark and quiet and Herman won't bother me there.

Karen Jo:  Herman doesn't bother you anywhere while you are napping that I have seen.

I like to take my afternoon nap in the middle of the living room floor or on my ham-mick.  Emma doesn't bother me while I am napping at all.
Posted by Karen Jo at 12:42 AM

If you think trying to get things coordinated with two cats is hard, try three like we have here! One of us is always annoyed with one of the others - and failing that, we are annoyed at my human.

We think you are loving having a sisfur Herman - it sounds as though you have fun together but also give each other your "own" space too.
luv Hannah and Lucy xx xx

You two sure are having some fun together!

ha ha ha! We think the back and forth between you two is a riot! You are typical siblings, that's for sure. And we suspect you love each other very much, as well. Life is good with a pal to enjoy it with!

We're happy to see the two of you becoming friends!!

Sounds like you are getting along better and better, Herman and Emma! :)

You look like you're having so much fun, gorgeous Emma=our Mommy would love to kiss that adorable belly!...Of course, no party is complete without the nip and mousies :)...Happy week ahead, sweet friends...xoxo...Calle, Halle, Sukki

WE are so happy that you two are getting along!

Psst, Herman, Speedy here, isn't it fun haffing a sisfur? I love watching my sisfurs, but ya do hafta set limits about da food. Usually I let Zippy eat den Sadie and I share, if dey had der own food dishes (mom) I would not hafta be such a gentleman and could just dig in. It's okay tho, Zippy only eats a few bites and Sadie don't eat much either.

I sure love it that you two are doing so good, see, sisters rock!!! p.s. Sister Gracie told me I should say that!

Wow, it looks like you both had lots of fun.

Oh emma, your cataloons are glorious!