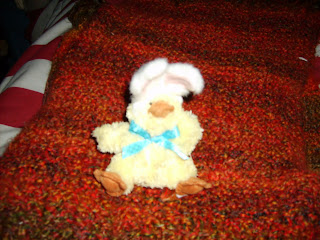 Mom couldn't find cat-sized bunny ears, thank goodness, so here is our Easter stuffie again.  Happy Easter, everyone!  We hope you all have a great time. 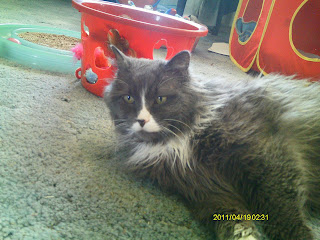 I am relaxing in the living room near the toys, but not playing with them. 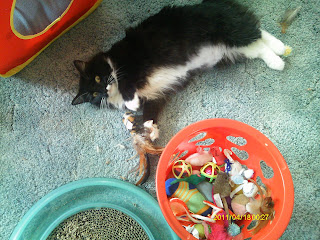 Emma: I am playing with one of the feather toys that Herman doesn't like.  I love this toy bucket with the holes in the sides.  I stick my paw in and fish out the little mousies, then play with them.

My favorite room lately is the kitchen.  Mom bought a whole smoked turkey and she has been sharing tiny bites with us.  I thought I was going to get to help myself, but Mom caught me.

Karen Jo:  I sliced off what I thought I wanted to eat, but left the turkey on the kitchen counter, in case I wanted more.  I didn't think anything about it because the last time Herman tried to jump up to the sink he didn't quite make it.  He had gotten too fat to jump that high.  Emma wasn't showing much interest in the turkey.  While I was eating, I heard a familiar thump.  Herman had jumped up on the counter and was inspecting the turkey.  I got him down and fed him bites until I finished.  I think he wanted more than I gave him.

I did want more.  I wanted the whole thing.

Karen Jo:  You couldn't possibly eat that much turkey.  Today you quit after six bites.

Emma:  I want more turkey.  I hardly ever get any.

Karen Jo:  That's because you aren't patient enough to wait for your bites.  I give you one bite, then you rush off somewhere else.  You have to learn to sit and wait, like Herman does.

Karen Jo:  I am having Easter dinner for lunch before I go to work.  I will make sure that you get lots of bites of turkey.  I think I will cut some up for you and put it in the extra food dish.

Emma:  Herman will hog it all, like he did with the tuna juice.  He drank up every drop of it, except for the one lick I got before he crowded me out with that big head of his.

Karen Jo:  I will make sure that you get some, Emma.  I have noticed that Herman has learned that if he positions his head directly above the food dish, you can't get your head in.

Emma:  At least he isn't being mean to me any more.

Karen Jo:  I noticed that both of you are getting better at sharing.  The two of you slept within inches of each other last night, all night, with Emma sharing my pillow and Herman curled up against my chest.  When I woke up in the early light to go to the litter box room, the two of you realized how close you were to each other and traded a couple of paw swats, but nobody moved and nobody made any threatening noises.  Both of you were still on the bed when I got back and you both got your early morning petting.  Tonight, Herman just watched Emma play with Da Bird.  I tried to get him to play again, but he wasn't interested until I got out his favorite wand toy and he played a bit with it and some more with a ball.

Emma:  I don't hiss at Herman any more.

Karen Jo:  I noticed and I really appreciate it.

So do I.  That hissing was getting really old.  I like to watch Emma play.  She plays a whole lot more that I ever did, but she's more that a year younger than I was when Mom brought me home.  I am playing more than I used to since Emma moved in.  I still think that ambushing her in the hall and chasing her around the living room is more fun than batting a ball around.
Posted by Karen Jo at 1:00 AM

Happy Easter to you guys! I am glad to see that you keep on getting better with each other.

We're glad you guys are getting along better everyday=we can't wait to see a photo of you two cuddled up together like best friends!...Happy Easter, precious friends...kisses...Calle, Halle, Sukki

Happy Easter to you all - we are glad to see you are getting along well and sharing your mom in bed!
luv Hannah and Lucy xx xx

Herman and Emma, we love reading about how the two of you are getting along so well. :)

Happy Easter to you all. Have a fun and wonderful day. Hugs and nose kisses

Happy Easter !!!!!!!!!!
We are happy you two are getting along better :) Sometimes Georgia & I trade swats too,heehee
Purrs Tillie & Georgia

Happy Easter from all of us to all of you!

We're so happy to hear that things are going so well at your house!

Hope you both get lots more turkey. Playing with another cat is lots more fun then swatting balls. Happy Easter to all of you.

Happy Easter from alla us at the Katnip Lounge! We think we might show up for lunch and eat smoked turkey with you. Mommy too!

Happy Easter! And many more Easters for both of you playing together!

Herman and Emma
We are so delighted to see you two sharing and caring about one another.

I really like your toybox Emma.
Happy Easter to all of you and with a lot of turkee too