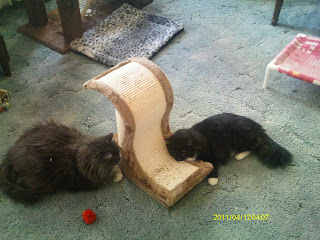 Hi, it's me, Emma, with my very own post.  Mom's allergies have been giving her fits lately and that's why we haven't been blogging.  She did go out Tuesday and get a new scratcher.  She set it up in the living room, then came and got me before she put the nip on it.  I enjoyed the nip, but didn't scratch on it.  Herman also enjoyed the nip and he didn't scratch on it, either.  In the photo, we are both just chilling and enjoying the nip.  Mom figured that we were well contented and went off to do whatever it is she does.  About three minutes later, she came hurrying back.

Karen Jo:  I heard a loud RAWNR and came to see what was the matter.  Herman was sitting halfway between the scratcher and the easy chair, facing the chair and looking as innocent as he could,  and Emma was underneath the easy chair trying to look as if she was just relaxing.  I don't know what happened, but Herman had been playing peek-a-paw with Emma.  He was hiding behind part of the scratcher and reaching his paw around the corner toward Emma.  However, the only other time I heard a sound like that it came from Emma as she pounced Herman.  Whatever it was, it has blown over and they are still both interested in the new scratcher.  Herman has scratched on it, but not Emma.  She is just interested in the nip.

The nip is the best part of it. 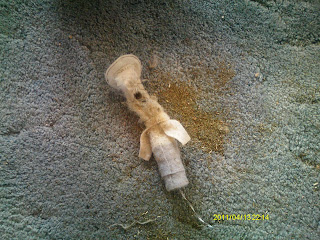 Karen Jo:  Speaking of nip, who did this?

Karen Jo:  I don't think so.  Herman played with that syringe toy for a year and nothing like that ever happened.  You are the one who has been playing with it lately.

It just smelled so good.  We had quite a nip party today.  Mom left the nip on the carpet and emptied the rest of it on the new scratcher.  She brought me a new nip pillow today when she went out.  I bit it and bit it, but nothing happened.

Karen Jo:  It is made out of heavy duty canvas.  You soon lost interest in it and Herman used it to take a nap on.  Both of you were nipped out most of the day.  It makes Herman sleepy, but you were tearing around the house like your tail was on fire.  You really went for Da Bird, too.

Da Bird is lots of fun.  I am really glad that I figured out what cat toys are for.  I got lots of petting this morning before Mom got up.  Herman and I have a deal.  He gets Mom when she goes to bed and I get her in the morning.  I worried Mom yesterday.  I hid between the bed and the bookshelves on the wall from right after she got up until she went to work.  I didn't even come out for lunch.  I just wanted some quiet time.

Karen Jo:  You did have me worried.  I was afraid that you were in pain or something was wrong.  When I got home from work, you were acting normally again, though.

Today was furmination day and I got furminated for the first time.  At least Mom tried to furminate me.  I was more interested in grabbing her hand and bunny kicking her.

Karen Jo:  I got some furminating done on you.  You tolerate the brush better.  You are doing some Spring shedding, but nothing like what Herman is doing.  Of course, his fur is a lot thicker than yours.

I'm excited.  I got invited to join The Tuxedo Gang and Mom said that I could.  I will be seeing you there soon.
Posted by Karen Jo at 12:01 AM

It's nice to see you are becoming part of the family, Emma, both at home and in the Cat Blogosphere!

You are beginning to get your paws under the table Emma - especially when you want something we bet!!
Luv Hannah and Lucy xx xx

Adorable picture of Emma and Herman. We send y'all our love.

This is a very nice report, Miss Emma. We are glad to sees you and Herman are getting along a bit better. Time-share deals are always the best when it comes to mommy. TK and I have the same deal, only I get her at night. You were very smart to figure that out!
Love, Squashies

Nice to see you sweet Emma, and remember, be nice to that handsome brother of yours!dherthu

We love that picture of you two chilling by the new scratcher. :)

Glad to hear you and Herman have pretty much figured things out!

Purrs and prayers for your mom and her allergies.

It's so sweet to see you two making friends. Great clawing, Emma!

Welcome to the Gang Emma!

We are all so happynthat you and Herman are making friends.

Be furriends Emma and Herman. It's good to have one another for kitty company.