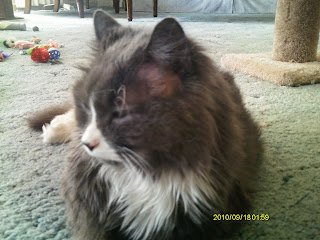 Mom says that she is getting tired of taking pictures of me chillaxing on the carpet, but that is about all I do while the light is good for pictures.  At least, that's all I do that she can take a picture of.  It's hard to photograph me when I am running down the hall.  The weather has gotten warmer again, so we have open windows all the time again.  Yay!  We did have steak and I got my bites and lick of sour cream.

Karen Jo:  You do love your steak.  You were nice about telling me when you had had enough this time.  Usually when I offer you a bite more than you really want you sniff it, lick it, take in in your mouth and chew it a couple of times, then spit it out on the floor.  I save it for you in your dish, but you never to back to it.  This time you just sniffed it and walked away, so I ate it.

So far I haven't been interested in the chicken.  Oh, I ate a tiny bit the first time it was offered, but that has been all.  Mom cooked a lot of it, so there is still time for me to decide that I want some.

I haven't been all that interested in my toys lately, but I am playing a new game.  I hide around the corner in the living room and wait for Mom to walk by on her way to the kitchen and then I leap out and attack her pants leg or her toes, if she is barefoot.  Then I run away.

I have been getting lots and lots of petting in bed.  Sometimes I push her hand away with my paw to let her know that I have had enough and sometimes Mom says that her arm is tired or she is sleepy and she stops.  It's great.

Karen Jo:  We did have a short play session tonight.  You got interested in a couple of your small mousies.

Mom snuck up on me to furminate me just after lunch.

Karen Jo:  I snuck up on you because, uncharacteristically, you were lying on your left side, so I started brushing your right side, which I hardly ever get to do.

The furminator caught on something and pulled a bit, so I reowed and got up.  Then I pooted in Mom's general direction.

Karen Jo:  Yes, you did let go of a stinky one. I think you may be getting the beginnings of a mat there, Herman.  If you don't let me brush it, you may have to have it cut or shaved out.  To those of you who may be wondering, Herman has very fine, very thick fur.  It mats very easily, so I am going to keep on furminating him every day.  I have to catch him standing or, rarely, lying on his left side to do his right side, because he almost always lies on his right side.  I don't just roll him over to do his right side because that upsets him and he trots away from me if I try it.  He will even hide under something so I can't brush him any more.  I don't know why he doesn't like having his right side brushed, because he will actually roll over on his back for me to do his tummy.  He purrs all the time he is being brushed or furminated, unless I catch a big snag.  He will let me brush him all over with the slicker brush, but I found out last winter that the slicker brush is insufficient to prevent the mats.

I got new treats today.  Mom gives me a few pieces of Party Mix after I take my pill and she found a new flavor.  It's called Picnic and it's turkey, chicken and cheddar cheese.  It probably isn't new everywhere, but she hadn't ever seen it in our store before.  I ate it all up very quickly.  I have been getting sneakier about spitting out my poop pill.

Karen Jo:  Yes you are.  I found three pills in the last few days.  One in your Friskies, one on the base of your scratching post on one by your small PTU where I give you your Party Mix.  You must be spitting it out after I think you have swallowed it.  Missing those doses doesn't seem to have done you any harm, so I'm not going to worry about it.
Posted by Karen Jo at 12:32 AM

I sounds like you are doing well, Herman! Just to let you know, I NEVER poot. It is something that girl kitties do not do! ;-)

It sounds like you're doing really well Herman! Keep up the good work.

You are looking good Herman - we're sorry you aren't taking your pills though. Mum breaks down Hannah's tablet with the back of a spoon and mixes it in with her food and makes sure only Hannah eats from her plate cos we often swap over!!
Luv Lucy xx

We are so happy to hear you are doing so much better! Mom LOL'd at picturing you attacking your mom's feets!

WE are so glad to hear that you are playing and living the good life with steak etc. We want to come visit have some of that good food. Keep up the good work Herman. Have a great day.

Hai, Herman!
It sounds like you iz doing purrty well for yourself, there! Attacking hoomans' toes! MOL dat iz funz!
Mom haz to give pills to Patches 2 times effurry day, an she uses a gizmo called a pill gun. It looks kinda like the thing the v-e-t uses to give shots, but haz no needle.
Da pill goes in da end, which is soft rubber, and mom can stick it far enuf back in Patchy-cat's mouth, den she strokes her neck, and kin feel da pill go down, so it no gets spitted owt.
Best wishes, purrs, nosetaps and headbutts to you, Herman!

We are glad you are doing so well Herman. We don't like Bean food much either.

Hi Herman, you look good in your pictures even if you are just chillaxing. Your weather is getting warmer and ours is getting cooler. Had a good rain spell today. Glad to hear you are still doing good. That picnic Party Mix is new. Mom just found it lately and we like it too. I also let Mom know I have had enough petting.

Herman, if you wanna chillax, than chillax. We both really like whatever makes ya happy...