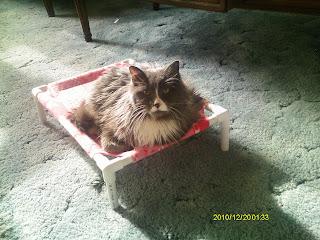 Just lying around in my ham-mick again.  We got some sun this morning, then it rained.  It looks like the snow will be all gone by Christmas. Speaking of Christmas, Mom is mailing out some of her Christmas cards really late.  She just can't seem to get with the program.

Karen Jo:  I was feeling pretty good yesterday, just very tired.  I decided to lie down for a little bit around four and zonked out until six-thirty.  So much for getting a bunch of work done.

Mom is having Mexican food.  I didn't like the smell of it and didn't even ask for any.  I hear we are having chicken tomorrow and steak for Christmas Eve.  That sounds good to me.  I got lots of treats yesterday and this evening.  Mom keeps putting stuff in my stocking, so it looks like a good Christmas coming up for me.  She says she didn't get my big present ordered in time, so she is waiting until after Christmas to order it.  I wonder what it could be.

Karen Jo:  I'm not telling, but I hope you like it.

Mom put her arm out last night when she went to bed and I went to sleep on it.  I got really ticked off when she moved it.  I was so comfy.

Karen Jo:  I let it go as long as I could Herman, but my arm went to sleep and began to ache.  I finally had to move it.  You didn't have to go all the way to the foot of the bed.

You disturbed me.  I came back up again after a while and snuggled next to you again.

Karen Jo:  And I petted you until my arm got tired.  It was a really nice time.

Yesterday Mom tried balancing the Santa hat on my head without using the chin strap, but I wouldn't hold still, so it wouldn't stay on.  Mom keeps saying that there will be a photo of a kitty wearing a Santa hat for our Christmas post, but I keep saying that it won't be me.

Herman, it sounds like it's a brilliant xmas. I sure hope you're giving your mummy lots of love an attention to thank her for your gifts :)

You should lay on her shoulder Herman! That way, she really cant move at all!

This is one advantage to being part of a multi-cat family: we lie on all sides of my human so she cannot move at all. She is totally boxed in! That way we do not ever get disturbed.

Stick to your guns and avoid that hat, Herman!

A very merry Christmas to you and your mom; we hope you both have a wonderful holiday!

Herman, you sure are giving that ham-mick a workout!! Sounds like you are gonna have a great Christmas...'cept for that hat business.

Oh no, the dreaded hat! I wish you and your Mom a Merry Christmas Herman!

Awwwwwwwww, Herman and Karen Jo, we love you lotz and lotz. We were looking for an email addy for you, as we have a pic of Herman in a Santa hat for your Christmas post....could you email us at samandy007@satx.rr.com and give us your email addy so we can mail it to you?????? It is our Christmas gift to two fantastic friends.

YOu sure look comfy. We hope you love your Christmas gift from Santa. have a very Merry Christmas.

You will have two Christmases!

Herman
I am glad to see you are still loving your ham-mick! OH maybe you can indulge your Mom just one short photo withe Santa hat on your head, Herman it would be a really cute picture of you.

Herman you look so cute in your hammick! We are jealous you have one (mom needs to get on the ball and get us one - or two - or six!) We think you probably wouldn't like most of the Mexican food - but sometimes it does have cheese which always looks tasty to us.

And we understand about the hat thing - mom put outfits on the oldest four before and they all hated it a lot. Mom found a good site that had a really good santa hat and made a picture there instead of trying it with Gus - it worked a lot better that way (and it is easy even for people who stink at photoshop). Tell your mom if she wants to take a look at it to email my mom and she will send her the link.

Sending you holiday cheers from across the miles and wishing you and your family a fun holiday filled with love and laughter.

Herman, you're doing an excellent job making your mom work to get a picture of you wearing a hat. We wish you both a very Merry Christmas!