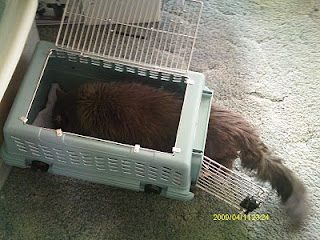 This is the PTU that Mom bought me at first. It's too small for me, as you can see. Well, you can't really see it too well, but I have my head at the back of the PTU eating my treats and both back legs outside the PTU. When I don't eat my Temptations right away, Mom puts them in here for me to enjoy later. She also puts some Party Mix in here for me every day. I eventually eat all of it. Mom wants to take over the blog now.

Karen Jo: Thank you, Herman. Herman is putting me through a real emotional roller coaster ride and it is leaving me drained and tired. That's why we haven't been blogging or visiting. I have become good friends with Herman's foster Mom and she tells me not to ride the roller coaster with him, but I can't seem to help it. I love him so much and he seems like he is miserable at times and I am sure that he is. Sometimes he eats quite a bit and at others he hardly eats at all. He didn't eat more than half of his Benefiber two days in a row and his poop got really watery again, so today I bit the bullet and mixed up a dose of Benefiber in water and syringed it into his mouth. He didn't enjoy it, but he didn't fight it, either, other than dribbling some of it out of the corner of his mouth. I think I got at least half of it down him, which would make up for the half he didn't eat last night. This afternoon, he was back to making pudding poop. He did eat all of his pro-biotic food.

Another thing that has been making me worried and tired is my Mother's income tax. The IRS wants a form with really confusing directions. I think I finally figured out what they want and filled everything out and mailed it in today. I feel relieved and less stressed already. Herman has been sleeping a lot, but he is not what I would call lethargic. I had the living room window open this afternoon, as it was windy, but warm. Early this evening, Herman suddenly ran across the living room and started looking up out the window by his platform. After a short while, he leaped straight up on his platform, which is 33 inches off the floor. He usually hops up on the armchair, then onto the platform. He ignores the ramps up altogether. He sat on the platform looking intently out the window and meowing a bit for quite a while. He even jumped down on the narrow windowsill next to the open window for a while. I didn't get up to see what had caught his interest so, because I didn't want to scare it off. I could hear and see the usual birds at the feeder, but nothing unusual. I was so happy to see him display such interest in something. I hadn't seen him run in weeks. He doesn't watch TV with me any more.

I was just in the kitchen and Herman has eaten almost all of his Benefiber food. Maybe he has decided that he would rather eat it than get it syringed in. This is great because he hasn't eaten much since midday. I will not be feeding him the pouch food with the gravy any more because I had run out of it today and I just gave him his medicine food and his usual Stinky Goodness. He ate much more of his nutritious food without the gravy to distract him. I have another problem. The pudding poop is an improvement over the watery kind, but it is stickier. Herman has dirty back feet and sometimes bottom most of the time. He doesn't step in it, but it dribbles on him. I think he would feel much better if I sponged it off him, but he hates for me to wash him. I am weighing up the pros of having him cleaner and feeling better against the stress he feels when I wash him. I gave him a quick wipe with a warm wash cloth today and he let me know how much he hated it with a loud warning meow. I think I'll give him a quick swipe with a really wet warm wash cloth once or twice a day and see how it goes. If I stress him too much, he'll just get sicker. I'm going to bed now. I am too exhausted to visit. Maybe tomorrow.
Posted by Karen Jo at 12:43 AM

Karen Jo you have our sympathy, we know how emotionally tiring this can be. Very glad you have some support from Herman's foster Mom, that can make a real difference. I expect Herman is fed up with the poop issue too. Maybe next vet visit he could get the hair on his bum clipped back - makes for easier cleaning? We've used baby wipes to clean up cat bums before. We just got your mail and have sent the info again. If that doesn't work, could someone on the CB send the info to you, someone you maybe already get mails from?
It's great that Herman jumped up on his platform and showed some interest.

Sending you both love & rumbly purrs

Karen Jo, as much as we purr for Herman, we also purr for you.

We are always purring for you and Herman too, but his foster Mom might be on to something, all this might just be your loving Herman ya know. Your stress adds to his stress and neither one of you need that. Trust me, been there, I know it is easier said than done...but we're all here for support!

oh Miss KarenJo and poor little Herman. We is so sorry that it's been so rough. Hopefully things will start to turn around some and the poop sichuachun will get better too. we is purrring for both of you!

(((hugs))) Karen, buy some baby wipes, they will become your best friend (get the unscented ones).

We are so sorry to hear you haven't had a good couple of days. At least some of the weight has been lifted off of your shoulders. And Mr. Herman??? Your mommy is trying to help you. Let her wipe you with the cloth, otherwise, you know what the next step is??? A GROOMER and that my friend, you will NOT like! So, be a good boy and listen to your mom. She's doing what's best for you!

Herman is so sweet, you try to get some rest and relax.
We's all purring for him. And fur you, too.
Love,
KC

We were thinking about the bum clip too. We always try to keep Gemini's a bit less poofy than the rest of her because otherwise if she has even one mess it is nasty to clean up.

We hope that Herman starts doing well again. It is hard with those babies. You can't not worry about them really so it's hard to keep yourself in an okay place. Herman is lucky to have you. You know--he really doesn't expect that you are going to fix things--they are what they are. He's just loving having a comfortable home that he can count on no matter how he feels.

Hi KarenJo, you know what Brian said makes a bit of sense.
As far as the tushie issue, I have taken to using baby-wips (rinsed in warm water,) to clean my babies' dirty bits. TK actually enjoys them and comes when I call "Tushie washings". Squashies is a bit more demure, but will let me wip her if I put her on the counter.

Try not to stess too much.

Purring for both you and Herman. I'm with the others on the butt clip, Tygana isn't longed hair but one of his cousins is and they always keep his butt fur trimmed to reduce the risk of any messes.

We are purring for you, Karen Jo. You have way too much stress.

Other cats have already given good advice, so we'll just add Please take care of yourself.

I know what you are going thru - our Minnie has similar issues. Just take it one day at a time - don't worry - your worrying is felt by Herman that he is not right. Just love and accept him just as he is. You are doing great taking care of him. Keep talking to his foster mom - she sound like she knows what is going on!

We here are all hopin fer good news anny day. We can guess how hard it is on both of you. Iza had problems her first few months, but got over it.

We hesitate ta suggest it, but mebbe it would be a good idea ta have a different vet test Herman, just for back-up?

We know how tiring and frustrating it can be tending to a kitty with "issues." We're purring for both you and Herman and we hope things get better....

Mom always keeps baby wipes on hand. Whitey has a double coat and if it's the least bit messy, it sticks. And as yesterday's post indicated, Grayson's floof means the occasional dingleberry! Mom also used them every time when Gracie was was very little and she still figuring out how to manage the little box with her special leg. Gandalf rarely has that issue.

Mom just picks us up with our head to her back and holds our tail over the top of us or beside our body under her arm to keep it out of the way and wipes until the bum and pantaloons are clean. None of us likes it, but we have full access to the bedroom and most of the house, so no poopy bums allowed!

Mom knows how stressful special issues can be, Karen Jo. She is sending big hugs and is lifting her wine glass in a toast to Herman's good health and stress-free days ahead for you.

Try not to get too upset. It's very difficult when you know that your kitty isn't feeling very well. And it seems that you are really dong all that you can for him. I'm sure that things will turn around dear!! Dont you worry!