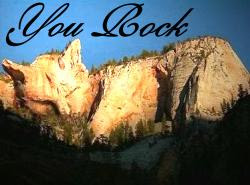 There isn't much to report on Herman. He is just about the same, not feeling good, not much interested in anything. He is going back to the vet this week and I will let you know what happens there. I am going to get him caught up on his awards. Cheysuli gave Herman this award quite some time ago. Thank you so much, Cheysuli. The only rule seems to be that you pass the award on to five more bloggers. Herman would like to pass this award along to:

Cory because reading her blog is so much fun.
Tygana because she does so much for the Cat Blogosphere.
Faith Boomerang for taking care of the huge cockroach.
Sammy and Andy because they are such faithful commenters.
Simba because he keeps coming back and commenting, though I hardly ever visit him.
Posted by Karen Jo at 12:20 AM

We continue to purr for you my friend. Please be well.

Oh Herman! we are rumbling out our loudest purrs for you to feel better and perk up. We hope the vet can come up with something to help you this week. Congratulations on your award. You really do rock!

We's been purring and purring fur you. I hopes the vet haf some ideas how to perk you up, Herman.
Faith Boomerang is gonna be so 'cited about the award. She was furry, furry brave to stand down that big cockroach while effurryone else was going nuts. I admit it, I runned too. That bug was BIG.
:: shudders ::
We's not gonna stop purring fur you an you is still on tha Purrs List on the CB.
Love & More Purrs,
KC

Congratulations on the award!

Congratulations on your award, Herman - both you AND your Mom rock! It is very kind of you to pass it on to me. I love your blog because Mom and I care about you and your Mom, and we enjoy the way you two have conversations on your blog. Purrrrrrrrrrrs.

Concats on the award!
We are sending you lots and lots of healing vibes, Herman. It makes us so sad that you aren't feeling better. We hope the vet can help you, sweetheart!

Darling Herman, we continue to purr and pray that you will get better. We love you!!!!

Thank you for the award....we think you rock too!!!!!! We'll try to get mama to post it tomorrow......:) she's a little slow on things like this also. xxxxxxxxx

Oh Herman--we will keep on purring hard for you. You know your Momma worries so much.

Herman, We are sending 12 rumbly purrs to you and your Mommy.
xx Lounge Kats

Please starts feeling betteh Herman. We is purring really loud for you!
TK

Congrats on the award!

We are still sending over lots of purrs and prayers - we really hope Herman starts to feel better soon!!

We are sending more hugs, purrs and prayers.

Hi Herman, Congratulations on your award. I'm sorry you are still not feeling well. We are sending up Purrs and Prayers for you. Please, still try and eat the food that has the meds in it so you will feel better. Take care O.K.

Herman, that is a great award!!!
We are sending you some big purrs so that you will feel better. WE will send some to your Mom as we know she is worried about you.
Purrs Mickey,Georgia & Tillie
PeeEss: The award pic is a 'mountain" and the word verification is "everest" How cool is that!!!

That is a cool award! Congrats! And we sure hope Herman starts to feel better soon.

Congratulations on the award/

Concatulations on your award. We are purring and praying for you, Herman (and Karen Jo, too)!

Poor Herman. We have been purring and praying for you and hoping for good news when we visit.
This may sound strange, it does to some beans, but have you thought about using an animal communicator? We have used one that is also a Reiki Master for humans. She has been a big help to Hendrix over the years, especially when we first brought him home.

Hendrix here: hey buddy, I hope you get all better soon. i usually am all for putting up a fuss, but i strongly believe you should take any and all medicine and letting the VET check you over completely so he/she can make you feel better. you're in our purrs and prayers.

Thank you so much for passing on this wonderful award to me. With all that you have going on Herman, I'm glad you can come and have fun at my place.

We are purring for you!

Oh, Herman, I hope you start feeling better soon. Good luck at the cat fix-it place. And don't worry your mom any more!

We agree both Herman AND Karen Jo rock! Congrats on the awardie...

Congrats on the award, but we are sorry to hear that Herman is still feeling blah. We hope he feels better really soon. We will send more pug snorts.