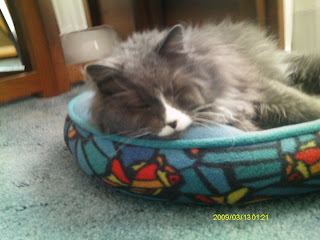 This is an older picture of me, but this is where I spent the day after going to the vet. I got weighed and had my mats shaved off. She got the big one near my hip and another smaller one by my elbow. My traitor Mom petted a D-O-G while we were there and I really told her off about it. When the vet was done with me, I showed my displeasure by making a poop puddle on the couch where the people are supposed to sit while talking to the vet. Everybody seemed happy that it was a pudding poop and not a watery poop. That kind of took the shine off being naughty by pooping on the couch. I didn't want to make them happy. The good news is that all my poops are pudding poops now and I got a new pro-biotic called Fortiflora that I seem to like better. When we got home, Mom opened a new can of Elegant Medleys and I hopped up on the counter and started eating it before she even finished mixing the Fortiflora in. I ate most of it right on the counter and I finished it off shortly after Mom put it on the floor where I usually eat. The bad news is that I haven't eaten much since. The really bad news is that I am losing weight.

Karen Jo: I'll say you are losing weight. You have lost two pounds in the last three weeks. You weigh less now than you did when I adopted you. I did notice that you were preferring your Elegant Medleys to your regular Stinky Goodness, but I thought that you were getting enough to eat. The vet lady did say that your big mat was really close to the skin and that it was probably hurting you, so I am hoping that you will feel better now. You now have a buffet out that most cats would envy and I even bought a roast chicken just for you. I hope that you will feel like eating some of it very soon. At least you still scratch for treats from time to time. I am also hoping that wolfing down your new pro-biotic like that just upset your tummy a little and that you will go back to eating more before the night is over. Your weight loss is really scaring me. I am very happy that we seem to be winning the poop war. The vet lady said that the change to pudding poop was a very good sign and that I should just keep on doing what I have been doing. She also said that I was taking very good care of you. That made me feel bad because I feel that if I were taking such good care of you, you shouldn't be losing so much weight. You got a new prescription for Prednisol and the vet lady mentioned that sometimes it helps to stimulate appetite. I am to get the pro-biotic in you any way that I can and that if you don't eat it all up, I am to dissolve it in watered down baby food and squirt it into your mouth.

Karen Jo: I don't want to have to do it to you, but I will if I have to. I want you to get better so much that I will even "torture" you to make it happen.

Update at 12:45 am: Herman just ate some of his crunchies, so maybe he is feeling a little better and will eat more. I will put out fresh food for him before I go to bed and keep hoping that he will eat more.
Posted by Karen Jo at 8:32 PM

Oh no! Herman I hope you start feeling better and gaining that weight back!

Herman, dood, a well placed poop is never wasted, even if it doesn't upset people. Intent is 99% of it, after all...

Sweet Herman, please eat and put on some weight...please please? Um, and if you aren't going to eat the roast chicken, can I have it?

Herman, it would make us and especially your mom very happy if you would start eating more. And if you eat your probiotic in your foods, you won't hafta get it squirted in your mouth. It's all really simple, dontcha think??

We're glad your poop is more pudding than puddle, too.

Do NOT make me have to khome out there and kikhk your khytty butt!

and then POOP SOLID as a rokhk!

Herman, that's a lot of weight that you have lost. Purring for some weight gain for you, buddy.

Mama had to squirt food into one of the cats before me, and I don't think its fun for anyone. But if it helps you eat, be good and eat! Avoid the squirted food! EAT! Please????? We all are worried about you.
Many many purrs,
brandi

Herman, feel better soon and gain back some of the weight you lost. Your mom is taking your health problems personally, even though we all know she's taking great care of you.

NIce work with the pudding poop Herman, it's always good to express disapproval this way, extra marks for doing it on the vet's couch too :)

We're sorry you've lost some more weight, but liquid poops can make that happen, we're very pleased all your poops are now puddings not liquid. Lets hope the new probiotic really gets the poops sorted.

Please try and eat up lots of fuuds whatever they contain. We are rooting and purring for you Herman!

Herman,
Glad you are making progress toward more solid returns on the food. Sorry you had less than wonderful news as to your weight but we think that when the poopies get more solid, you'll start putting the weight back on.
Karen Jo, it's possible that Herman might have just been stressed from the vet visit, so give it a little time and see what happens with his eating. You are doing a good job and sometimes it takes a little longer to see the results.
Snuggles and purrs,
Taz, Runt, Charles and mommy, Anna in Illinois

I think Prednisolone might be a bit easier on cats that Predisol. You could always check with your vet. Annie was on Prednisolone when she was sick a few years ago. But they mixed it up with a flavour so it wouldn't taste quite so yucky going down. (I had to syringe it in because she's can't be pilled.)

I'm surprised the vet didn't give Herman FortiFlora before this. I just thought it was the standard probiotic, but I don't know enough about brands of probiotics. All mine loved it--it's made with animal digest and apparently tastes great to them. I hope Herman continues to eat his!

Fingers and paws crossed for him. Sending lots of purrs and healing Light.

Please be well Herman. We're so worried about you.

Oh Herman, I'm sorry you have lost some weight. I hope the new medicines will help! Eat as much as you can, okay?

Hi Herman, I hope you are eating more now!
Your Mom is taking great care of you!
Smoochies!

Karen Jo! We just got this message on our 2nd attempt to send you the info about the drug - we got a delayed delivery notice yesterday but it said we didn't need to resend the mail - weird.

"Unable to deliver message to the following recipients, due to being unable to connect successfully to the destination mail server"

Do you have another email address we could send the info to? If so, please let us know

Oh Herman we hate to hear you've lost weight. WE hope that you will start feeling more like eating now.

Just a question: do you think a feeding tube would help Herman get over his (I'm sure very good reasons) for not eating?

Oh Herman, we hope that you will start to gain some weight. We remember how scarry it was for our mom when Floyd started to drop a lot of weight - she is sending both of you lots of hugs, and we are sending lots of gain weight purrs and prayers. We are glad that you like the new probiotic better and hopefully now that the nasty mat is gone you will feel better and gain some weight. You are lucky - most of the time kitties have to loose weight - but you can eat as much as you want right now so please take advantage of it. We are crossing our paws for you to eat eat eat and gain gain gain!!

Herman, can you feel the purrs coming from all over the world? We're all purring for you...so let's eat!

We are all purraying furry hard for you, Herman! And glad to hear your poopies are pudding and not water. Hopefully, you're starting to feel better and you get your weight back. We just know you can pull through this!!!

Herman, we are a little bit naughty because we laughed when we saw "pudding poops". We think the all the poop puddles may have dehydrated you. Now that you have that really expensive Fancy Feast you will be eating much better now! Nom!

Oh Herman, we want you to be better. Please eat all your food and medicines, it would make your mom and everyone else so happy.

Aww Herman, please eats your foods. Your poor mommy is so worried. (We are too.)
We is purring for you to gets better real soon!
TK
P.S. Suppose I comes over and eats your buffet for you, then gives you the weight? Just trying to be helpful buddy.

Herman, I really like your bed it is so colorful. I sure hope you will be feeling a whole lot better real soon and gain some of your weight back. Just keep eating good like you did yesterday.

We're very glad your poop is improving. YAY! Losing weight is not good. Keep in mind that weighing a squirming kitty can be very difficult and can be somewhat inaccurate if the vet or technician places pressure on the kitty to keep him in place while he is being weighed on the scale. We hope that is the case and that your weight is not fluctuating that much. We're purring very hard that your poop continues to improve and that you gain back some weight.

Oh Herman!! Please eat lots and gain your pounds back!! We are glad the poops are better though!! ((((HUGS))))))) from all of your TX furiends,