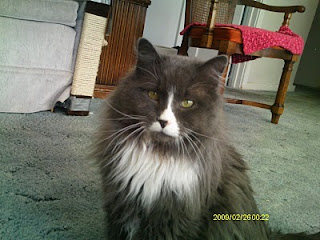 I just got brushed again and now I am looking at Mom, wondering what she is going to do next. Mom is now brushing me twice a day. I love it. I took a couple of half-hearted swipes at my wand toys today, but wasn't interested in my other toys. I don't know why Mom is making such a big fuss over my not playing. She has always known that I am not much for playing.

Karen Jo: It's just that now you don't play at all and that worries me. Otherwise, you are acting normal. You chitter at the birds; you snoopervise my cooking very closely; you cuddle with me in bed and wake me up for breakfast. I am now going to talk about poop, so stop here if you don't want to learn more than you probably want to about Herman's litter box.

I am really confused now. I found both poop puddles and normal poop in the litter box this morning. My problem is that it looks like the normal poop came after yesterday's poop puddles, but before the ones I found this morning. Herman is back on the diet that he was eating when he first moved in, except for the sardines, but he was getting tuna almost daily at his foster Mom's, and he didn't make poop puddles then. Can it be taking this long for the effects of The Missing Link to wear off? Could giving him The Missing Link have caused him to develop a more sensitive tummy? I just don't know what to do. His appetite is normal and he is eating more of his Fancy Feast than he was, but still leaves it totally alone in favor of his dry food sometimes. He drinks quite a bit, especially from the faucet. I feel sure that he isn't sick, because he doesn't act like a sick cat. He is very interested in his surroundings and he's not hiding or lethargic. If the poop puddles don't stop soon, I am going to have to take him to the vet, because it's just not healthy for it to go on for so long.
Posted by Karen Jo at 12:50 AM

My brother Rusty was always found to have worms when he had loose stools. He enjoyed the outdoors and caught chipmunks, and got them that way. Just something to keep in the back of your mind.

Why not try just the dry food with nothing else for a week and see if he improves. Analogous to a person going on a "white diet" - rice, chicken, etc when have digestive trouble, until things normalize.

Could it be a phase of not wanting to play? Sometimes I go weeks without wanting to play with mummy, but then when I do I wanna play ALL the time... maybe Herman is just having some down time?

I hope that you get it all figured out!
Smoochies to you Herman!

It could be worth taking a sample of poop to the vet and getting it analysed and hopefully getting an idea of what is causing it. We hope it clears up soon.

All kind of things could be going on...too much water could indicate diabetes (like emptying the water bowl constantly)...but the poops can dehydrate too so he might just be replenishing. Remember that diet changes can be very upsetting to our tummy, no matter how small the diet change. We're hoping your feeling better soon Herman.

We're sorry you're having poop problems. We think you should probably check things out with the V-E-T before it gets worse.

Sniffie and the Florida Furkids

Maybe taking a poop sample to the vet would be a good idea. And Brian is right - any change in diet can upset a cat's sensitive tummy.

It's also possible that the additive to Herman's food might have been acting like fiber and now that it's not being added any longer, his body is having to readjust.
I would keep an eye on the situation and see if it improves in a day or two.
Good luck,
Anna in IL (mommy to Taz, Runt, and Charles)

We must apologize, because the title of the post made us laff and laff, Herman.

Mom Barb here. Karen Jo, I would ask the vet for the pill to de-worm him as a precautionary measure. It's cheap and it certainly won't hurt. As long as he's drinking and not dehydrated, I would wait out the loose stools, especially if he isn't showing any other signs of being sick.

I would check in with the vet to see what is going on. As you feed better foods and supplements like the Missing Link this can build gut bacteria in a good way. That gut bacteria can cause some diarrhea as it clears out the bad stuff. When you eat anything that is bad, you do tend to be more sensitive because your body isn't used to being overwhelmed with so much bad stuff any more.

However, there are so many reasons for intermittent diarrhea that I'd have a vet check it out.

Just fyi...our Nigel is just starting to play. I think it's because he was in survival mode so long. It's taken him a whole year!

Yeah,us girls are good for him!

WE hope you get it under control soon

I know about constipation but not poop puddles...sorry. You probably should take a poo sample in to the vet.

Lots of cats don't play a lot...I don't anymore. I think I stopped at about 3 years old. Sometimes I do but mostly...nope.

The poop puddles, though...yeah, I'd call a vet, just in case. Could be anything, could be nothing, but it can't be comfortable...

I don't know that I would worry about him not wanting Fancy Feast all of the time. I had 2 cats that would only eat it as a treat - if I tried giving it to them several days in a row, they would only take a few bites then walk away. As for the rest, I have no suggestions.

I say check with the vet - acting normally is not that uncommon when a cat is sick - it goes back to when they were wild and couldn't look weak to predators. It really could be nothing but I think it warrants at least a call to the vet to see what they think.