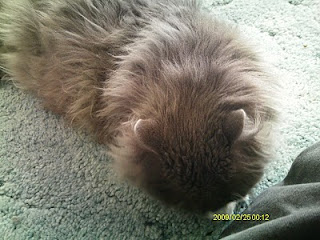 I have just been brushed and now I'm cleaning my toes. I am still not feeling all well yet. Mom wants to tell you about it.

Karen Jo: Apologies for the long time between posts. My dentist wanted me as rested as possible before surgery, so I went to bed shortly after I got home from work up until the surgery date. The dental surgery went very well and I feel fine now. The allergies are even letting up a bit.

Herman perked up quite a bit right after I cut down The Missing Link, but the diarrhea didn't go away. Last night I took him off The Missing Link completely. He wasn't playing much at all and he was only eating about half of his Stinky Goodness and less than that of his sardines. He has been preferring his dry food. He is not acting really sick. His tail is always up, with that little question mark curl at the end. He demands his canned food, but then just picks at it. He still grumbles his way down the hall when he thinks I don't get up quickly enough, but he doesn't run down the hall full speed like he used to. He still loves his brushing and we had lots and lots of great cuddle time while I was recuperating from my surgery. Tonight he ate almost all of his Stinky Goodness, so maybe The Missing Link is getting out of his system and he will be back to normal soon. I hated to take him off of it, because I could tell that it was doing him good, but if his system can't tolerate it, then it has to go. I am ordering him some 3V to see if he will accept that added to his food. I am hoping that it was the fiber in The Missing Link that was causing him problems. If he doesn't get back to normal soon, then I will have to take him to the vet to see if there is something else going on.
Posted by Karen Jo at 12:32 AM

Oh you guys are having such a time of it, we're hoping for much better days ahead!

(If we didn't have our mummy, we'd want you for a mummy Karen Jo, you're such a great mummy)

What a rough week!! Hope you all have a restful and healing weekend!

I'm sorry you couldn't tolerate The Missing Link, Herman! I hope the 3V will help you. Feel better soon!

Yes Herman, Mom has to watch you, because she loves you and you are so special. Tell Mom what you need and she will figure it out...Moms are like that, yea they are!

We're happy to hear you're better, Karen Jo.....now it's Herman's turn. FYI, Andy has a really sensitive tummy and he gets the "drizzles" from most everything except dry food. Makes it rough on Sammy cuz then Sammy doesn't get the other extras either as it's not fair to feed them to him when Andy loves them, but they don't love Andy.
We hope you get the key to feeding Herman figured out soon.....you are such a wonderful mom. xxxxxxxxx

We will purr that everyone gets back to their healthy self!

Have you tried Science Diet Sensitive Stomach? Maybe that would work. I hope you don't have to go to the cat fix-it place.

Oh, and Caroline always scream scream screams for dinner and then she never eats it! So it may be a one-out-of-five-cats thing, and you might be that one cat!

We's glad your mommy's teefies went good.
We hopes you gets better soon, is not fun to not feel likes playing. Sounds like your mommy is working on it! Hang in their Herman!

Hi Herman, we wish you were feeling better. We are glad your mom is doing really well - we were thinking maybe you were a bit worried about her so you had tummy troubles more than normal. We hope you are back to your old self soon - we are sending you lots of get well purrs!

We are purring that Herman is feeling better! We know it is a bad week when every one is not at their best!

We hope you are soon feeling better Herman.

We sure hope you feel better. You're such a cuddly fluffy guy - our Lady was just ooohing and aahhing at your pictures.

Oh, Herman, we're sorry you're not feeling quite up to par. Purrs and prayers that you get well soon.