Karen Jo:  I took Cricket's picture yesterday as a "just in case" picture and I took Chevelle's picture a few days ago with my phone, just because I thought that they looked cute.  I fully intended to take better pictures of them this morning, but life intervened.  I will take better pictures of them both in the future.  Now on to the new kitties. 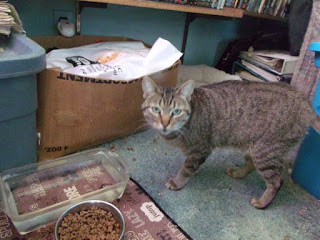 Karen Jo:  You wouldn't hold still.  This is the best I could manage at the time.

Cricket:  Oh, well.  I'm Cricket.  I'm 3 years old but I only weigh 6 pounds.  The only thing that I remember about the before time is that I had a kitty buddy that I was taken away from and I ended up here in early October.  I am in the safe room here, where I still spend a lot of time.  When I first got here Mom was told that I was lonesome for kitty company, so Mom put Maddie in the safe room with me.  That didn't quite work out.  Maddie ran out as soon as Mom opened the door again and wouldn't come back in.  I stayed in the safe room for a week, with little trips of a few minutes each, to explore.  Then I came out for good, but this is still my favorite room.  When I had been out for a week, Chevelle came to live here. 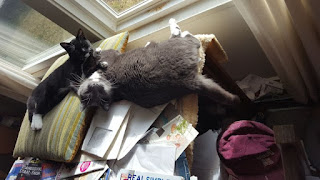 Chevelle: I don't remember anything about the before time, either.  I came to live here in mid-October when I was 4 months old.  Mom's plan was to put me in the safe room by myself for a day, then introduce me to Cricket.  That didn't work out as planned either.  There is a high-sided cat bed on the couch in the safe room that Cricket likes to sleep in.  All the other kitties were very interested in me and I was interested in them and some of them followed us into the safe room while I was still in the PTU.  Mom had dumped her coat and purse beside the door before she closed it.  Then she evicted the other kitties one by one and got me some food, which was all ready to be put in my bowl in the safe room.  Then she picked up her coat and purse to go put them away and leave me on my own for a while when she saw Cricket.  Cricket had been napping in the cat bed on the couch and Mom never noticed her.  Mom decided to go put her coat and purse away and come back to evict Cricket.  Hahaha!  By the time Mom got back, Cricket and I were curled up together on the couch, cozy as could be.  She put some food in Cricket's bowl, which was still in the safe room, as Mom intended for us to be together and left us alone together.  Cricket was great company, but she got bored in the safe room and went out for a while each evening, but always came back at or before Mom's bedtime.  After about 5 days of this, I followed Cricket out and wow! what a different world!  I got overwhelmed and ran back into the safe room.  Mom closed the door on me.  I let out the "kitten in distress" meow as loud as I could and Mom opened the door again.  I stood in the doorway for a while, just looking around, then went out to introduce myself around.  One of the first cats I introduced myself to was Clancy.  He's nice.

Karen Jo:  I was amazed at Clancy's reaction to tiny Chevelle.  They sniffed each other all over, then Chevelle rubbed up against Clancy and he accepted it.  He is extremely gentle with her and they even play together.  It's hilarious to see tiny four pound Chevelle chasing huge Clancy down the hall

Chevelle:  At bedtime, Cricket went back into the safe room and I followed her.  Mom shut the door again.  MEOW!  Mom opened the door again and it has been open ever since.

Karen Jo:  You get the Brave Kitten award for being the very first kitten ever to want the door open forever on your first trip out of the safe room.

Chevelle:  I have lots of fun now.  Almost all of the other kitties like me and I cuddle with Cricket and play with Clancy, Gandalf and Maddie.  The photo is of Gandalf and me cuddling.

Rocio, Bambino, Julius, Tabitha and Maddie:  What about US!  We want a turn.

Karen Jo:  It's your turn next time.

It's so nice meeting you two!

It is lovely to meet you both, and lovely that you made friends right away.

You two landed in a great home!

Such cuties, I am glad everyone is getting along.

WE are so glad to be meeting all of you!

You two are in a great home now!

Yang and Chimera are the two that play together here and he is HUGE compared to her. But for the most part he is gentle with her. He and Yin play really rough together but they are about he same size. Yin and Yang came from the same litter.