Karen Jo:  Today we will hear from the kitties who were here when I stopped blogging so long ago.  Maddie had barely introduced herself when the bad stuff started happening, so I will let her do a lot of the talking.  The pictures of Rocio, Bambino, Julius and Tabitha are old ones, but you haven't seen the one of Maddie before.  I need to get in some practice taking photos again. 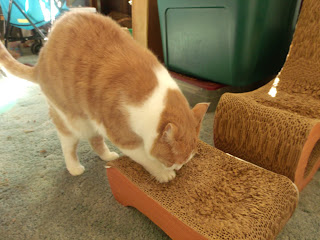 Rocio: See how worn this scratcher is, especially the chair part?  I jumped up on the chair and went right through it.  Luckily Mom bought us a new one.  Not much has changed for me, other than the changes brought about by Clancy coming in and making himself Alpha.  He was really mean to me at first, cornering me and making me scream, mostly.  I gave in to him right away.  Now that he has calmed down, I have gone back to napping in the laundry basket and on Mom's bed.  I don't hang out in the living room much any more.  That's Clancy's hangout now. 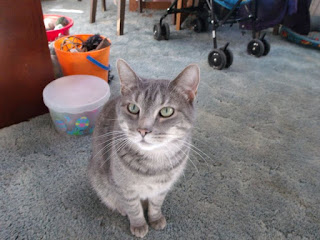 Bambino:  The changes around here really turned my life upside down.  Oja was getting to be a real pain to the rest of us, so I wasn't that sorry to see her go, but we all missed her.  The first really big change for me came a year later when Spyro and Horus left.  Spyro was my best bud since I moved in here as a kitten, over four years earlier.  When Spyro became Alpha, he made me his lieutenant and I helped him enforce the no bullying rule.  You should have seen Spyro fight being put into the PTU by the two strangers who came to take him and Horus away!  I hear he's happy in a new forever home now.  I really hoped that I would be allowed to go with him, but I didn't quite manage to beat this stupid FeLV.  Gandalf, Rocio and I were discussing who was going to be new Alpha when Evil Clancy moved in.  None of us stood a chance against him.  He's bigger than Spyro and MEAN!  I hate him.

Karen Jo:  He has calmed down a lot now and his bullying has almost stopped completely.

Bambino:  I don't care.  He's mean and a bully and he took my rightful place as Alpha.  I am going to hiss and growl at him whenever I see him.

Karen Jo:  I'm really sorry that things turned out this way for you, but he's here and he's going to stay.  You have let him turn you into a grumpy old mancat.  You even hissed at the new kitten when she came up to you to make friends.  You had never hissed at a new cat before in your life.

Bambino:  I have become suspicious of new cats since Clancy.  You keep bringing them in, though.

Karen Jo:  You know perfectly well why new cats keep arriving.  I wish that you would settle down and accept the new situation.  It's been months and months now. 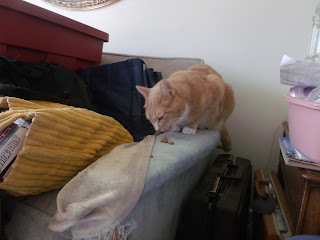 Julius:  Mom is going to be really lucky to get any new pictures of me.  Clancy really scares me and I have gone back to hiding 99% of the time.  He still chases me if he finds me out in the open.

Karen Jo:  Clancy has changed since he first got here, Julius.  Now he wants to play with you.

Julius:  I don't trust him.  I am going to stay in hiding. 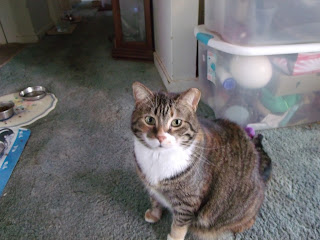 Tabitha:  Not much has changed for me.  I have always been a bit of a loner cat and I never cared who was Alpha: Oja, Spyro, Clancy, it's all the same to me.  I like Mom the best and just kind of tolerate the other cats.  Clancy never bullied me.  Other cats all seem to sense that I have no interest at all in being Alpha, so they leave me alone.  Clancy and I are as much friends now as I ever make.  Right now we are lying next to each other on the table by the big window enjoying a sun puddle. 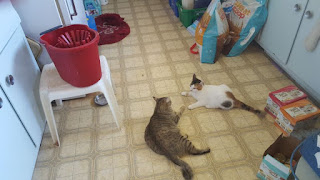 Maddie:  I first moved in here as a 5-month-old kitten.  I decided to make Horus my best friend and we played and played together, though he didn't want to play as much as I did.  Then a wonderful thing happened a month later.  Sea Shell moved into the computer room and I moved in with her after a couple of days.  She was only a month younger than I was and wanted to play just as much as I did.  The photo is of the two of us playing pawsie and getting ready to wrestle.  Six months later Sea Shell moved back into the computer room exclusively and growled at me when I tried to play with her.  I didn't understand at all.

Karen Jo:  Sea Shell had a FeLV flare-up and she was feeling sick and didn't want to play any more.

Maddie:  It broke my heart.  I stopped trying to play with her, but I visited her every day.  After about a month, she started to get better.  She was moving around more and we would rub up against each other, but she still wouldn't play.  I tried playing with Horus, but my heart wasn't in it and he wanted to play even less than before.  After two months, I got my hopes up really high.  She was running around again and playing patty-paws, but then she disappeared one morning and never came back.

Karen Jo: That part broke both our hearts.  We had gotten her through the flare-up, but cancer of the blood vessels moved in and took her away to the Rainbow Bridge.

Maddie:  After Sea Shell left, I stopped playing.  Oh, I would occasionally bat a ball around for a little while, but mostly I didn't play at all.  I started kind of hanging around with Tabitha, but that was it.  In early October a new kitty came and Mom tried to get me to make friends with her, but I wasn't interested.  Then two weeks later another wonderful thing happened.  Chevelle the kitten moved in.  I couldn't have cared less until she came out of her room to stay.  She wants to play with every cat and I couldn't resist.  Now I am playing again.

Karen Jo:  I noticed something interesting about cats in mourning over losing a friend that they were very close to.  When Austin went to the Bridge, Rocio was devastated.  Bambino moved in shortly thereafter, but Rocio totally ignored him.  A while later Julius moved in and Rocio practically adopted him.  When Maddie lost Sea Shell, Cricket didn't spark her interest at all, but Chevelle made good friends with her right away.  In both cases, it was the second cat to move in that got them interested in making a new friend.  It didn't work with Bambino.  His personality has completely changed, but I think that has more to do with Clancy than anything else, other than losing Spyro.  I'm not sure what to do from here on, but I'll think of something.

The pictures and the stories behind them are all so wunnerful! We think you have some REALLY LUCKY KITTIES to have a Mom like you...

I'm glad to see you kitties again! And to know you are still hanging in there. Maybe some day, some of you will be able to find homes of your own like Spyro and Horus.

Seems like you have a full house. The kittens had a little over a year with Socks before he had to go to the Rainbow Bridge. While everyone missed him they knew he was going and had time to prepare. And Scylla is really close to her mini me (Chimera).

It is lovely to see you all again. Karen Jo does a wonderful job looking after you all.