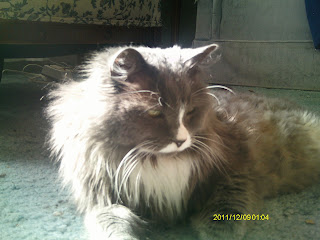 I have just been brushed.  That's why my fur is sticking out a bit.  I haven't turned into electric cat again, but I am afraid that it is coming.  I found this great sun puddle and plopped down in it for a while.  Mom keeps fussing with my fur and pulling at it and threatening me with the little scissors.

Karen Jo:  I need to keep up with the little mats before they become big mats.  I got one out of your chest fur today, but it took me three tries.  You keep squirming away from me.  Tomorrow I will go after the one on your foreleg.  It beats me how you can get a mat in the short fur on your foreleg.

I am just talented that way. Mom deserted me for the first time since she got sick.

Karen Jo:  I had to go to the store.  I was going to go out again, but decided that it was too cold.

What was that yummy stuff you were making in the kitchen after you got back?

Karen Jo:  I am going to a Christmas party tomorrow and needed to make a snack.  I made a Braunschweiger ball and boy, were you interested.

It all smelled so good that I just had to have some.

Karen Jo:  I let you have a few licks of the Braunschweiger/Neufchatel mix before I added the seasonings.

It was really good.  I want some more.

Karen Jo:  Sorry, Herman, but it's for the party.  If there is some left over, I will bring it home, but you still won't be able to have any more.

Karen Jo:  I added onion and horseradish and bourbon to it.  None of that is any good for you.

Rats.  If you eat any of it in front of me, you better be prepared for lots of begging.  Not much else happened today.  I curled up on the couch with Mom while she read after her chores were done.  I love the way she pets me while she reads.  She even put the book down and just petted me for a while.  Then she found the mat on my foreleg and I left when she reached for the little scissors.
Posted by Karen Jo at 6:22 PM

Sorry to hear those mats keep appearing, Herman. Please let your mom help you get rid of them, okay?

We've never had a Braunschweiger ball before, but it sounds NOMMY.

Have a wonderful weekend, friends ... filled with reading, petting and togetherness!

I too love it when my human reads and pets me while reading. Fortunately my coat is smooth so I do not get mats.

Herman, you really need to let Mom get ahead of those mats!

We all luf it when the Mom pets while reading. Mom says we get "in the zone". MOL! Sounds like your Mom is a delishus cook! Mebbe she will bring you sum other treat you can haf! Happy Caturday. xoxo

A Braunschweiger ball? That sounds very exotic and yummy! I can't imagine my lazy human making something that cool, even if it does have bourbon in it (she has a thing for alcohol-added goodies). I think your human should have made a cat-safe version, just for you, Herman!

Yes Herman, let Mom keep up with those nasty mats. My Sister Sascha says they are no fun at all. Have a happy weekend pal!

hmmm, that brown-bagger ball thingy sounds deelishus! We think you need one for Catmas.
Herman, it's electro-cat season here, too. Mommy has started to groom us in the bathroom after she showers so we get a little humid and don't get shocked!

Herman
I hope that your Mom can get those mats out without hurting you. We are lucky we don't get those. I bet your treat did taste great. We are sure your Mom will make something terrific that you can have.
purrs
>^,,^<
♥Abby♥Boo♥Ping♥Jinx♥Grace♥
PS
We all miss Emma.:(

We're sure glad we dont get mats! Those little scissors sound annoying.

Those mats are a pain but they have to be cut out, Herman, you know they do. But if you could maybe get a treat for sitting still????

Hey that sounds very gud!
My mommy wants to suggest that you gets a little humidifier fur the fur. It helps us bunches.
We hopes you has a great day!
Love, TK

Herman, you and me have a special talent. I can make knots in the short fur between my toes hehe. They are short and then some.