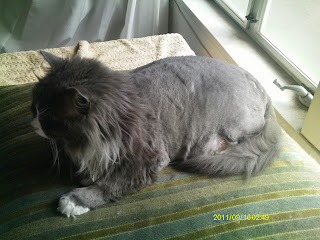 I found a sunspot on the big pillow in front of the living room window.  Mom would get me shaved just when the weather turned cool and rainy.  I am trying to keep warm now.  I am also using my ham-mick and bed in front of the heater again.  This is called a half-lion cut.  I think it is more three-quarters.  I thought Mom would become a better blogger when she retired, but she's worse now.

Karen Jo:  My apologies.  I am still trying to get used to my new schedule, or rather a lack of one.  I fall prey to the lure of the TV much too often, then fall asleep watching and don't blog.  I am also going out more.  I love having a social life again.  Working nights and weekends meant that I had barely any social life at all.  I promise to do much better.  Herman, don't complain about your shave too much.  You know that you feel much better.

True, I am running around and playing much more, now that my flanks don't hurt from the nasty mats. 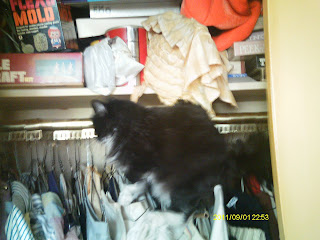 Emma:  One of the things that I really like about having Mom around all the time is that she lets me explore places I was never allowed in before.  I surprised Mom by getting up on her clothes in her closet when she was trying to pick out something to wear.  I walked from one end of the closet to the other up here, then I jumped down again.

Karen Jo:  I was about to offer you a ride down, but you handled it all on your own.

One of the things that I don't like so much is that Mom changed our lunch time.  We used to get fed at 1:30 every afternoon.  Now we have to wait until three or four.

Karen Jo:  I was throwing out so much food that you didn't eat between breakfast (any time between 8 and 10) and lunch that I decided to space out your meals more evenly.  Now most meals get eaten almost completely.  You still get breakfast and supper at your regular times.

You are not giving me enough treats.

Karen Jo:  I am only giving you one treat at a time and only several hours apart now.  You need to cut down on treats so you can lose weight.  You need to go in for a weighing again fairly soon.

Rats.  Hey, maybe I lost weight when I got shaved, so I will weigh in at less this time.

Karen Jo:  That's possible, but you are still not getting more treats.

Rats again. At least I still get nibbles from your meals.

Emma:  Mom has started giving me a treat when I take my Interferon, but I still run from her when I see the syringe.

Karen Jo:  I don't know why you don't like it.  It's just a little squirt of cold water in your mouth.

Emma:  It's the cold I don't like.  It makes me shake my front paws and sometimes give a little shiver.

Karen Jo:  Sorry about the cold, but the Interferon has to be refrigerated.  Herman likes it.

I still shake my front paw right after I take it.

Karen Jo:  Emma is still having a lot of fun chasing the ribbon tied to my Happy Retirement balloon.  It's Mylar, so it still floats.  Today, she was playing with it in the living room when I left to attend a meeting.  When I returned several hours later, Emma was napping on my bed and the balloon was in my bedroom, too.  I am guessing that she grabbed the ribbon and took the balloon with her.  The windows were closed, so it couldn't have drifted there on its own.

Emma:  I am not saying a word. It is really fun, though.  I am also still very partial to my new wand toy, though I still like Da Bird best. We are getting more play time, though we aren't always interested when Mom wants to play.

Mom went on a toy hunt the other day.  I love watching her lie on the floor and try to reach the toys we have batted under the couch.  She found a bunch of balls and a couple of mice.  Mom has been watching me pounce Emma.  I jump out and try to grab her with my front paws.  She always gets away, though. Sometimes I chase her afterward and sometimes I don't.  I like to keep her guessing.

Emma:  I don't know why Herman wants to grab me.  I don't mind it, or the chasing.  I can always get away from him.  He won't follow me if I go up high or if I duck into any of my hidey-holes.  Herman can be fun with toys, too.  I whapped a ball near him and he whapped it again and I chased it.  He lost interest after that, but it's the most play with toys interaction Mom has seen between us.

Karen Jo:  The two of you seem to be getting closer and closer.  Most nights both of you sleep with me on the bed, though not close to each other, usually. The other night Emma beat Herman to his favorite spot next to my chest where I pet him.  I was petting Emma when Herman showed up.  He just lay at my feet, out of whapping range from Emma and went to sleep.  I kept expecting him to try to get his spot back, but he never did.  I didn't even try to pet Herman, because I know how Emma reacts when I switch my attention from her to him, even if I pet both of them at the same time. The upshot is that Herman is no longer jealous of Emma, but Emma still gets jealous of Herman. What was really unusual is that Emma stayed by me all night.  She usually moves during the night, then Herman reclaims his spot.  I had both kitties in bed the whole night, which was really great.
Posted by Karen Jo at 4:44 PM

Herman, you know we'll all want half lion cuts now that we see you looking so stylish!!

Herman, we think your new cut looks terrific and the mom's angel Chumely knows how good it feels to be mat-free.

We're very glad your mom's enjoying her retirement--that's what it's for. :-)

Hahaha!
Have a great weekend friends!

Herman that haircut sure didn't take any of your handsome away and the hair will grow back. Just keep warm and enjoy that sunshine.

Emma you sure did find an interesting place to explore.

Your mom sounds very busy. It is always good to hear from you all. Hope you are having a terrific weekend. Hugs and nose kisses

Herman, fur does not make the Man Cat; you're still handsome in our estimation! You must feel SO much better, we know that your Mom wouldn't have gotten you shaved if it hadn't been totally neccessary. Miss Emma, we think you're the best thing ever for Herman--and it's funny how you are jealous of him! We wonder if you two will cuddle when the weather gets colder.

We think you look pretty good with your short haircut, Herman!!

Oh noes...our Teri says when she retires she will have lots of time to blog...guess not always the case! Thanks everso for stopping by our bloggie today and leaving us such a nice comment, you made Teri smile and that's nice to see.

Your mama rescued you and we loves visiting you and seeing how good you are doing and the commentary always makes us laff cuz it's like the conversations round here sometimes!

Yes, we bet you have a real 'spring in your step' with your new 'do' and we are glad you are feeling so good!

It sounds like your human is TWICE as busy now that she has "retired!" And here I thought that meant she would be working for you kitties full time!

Looking good, Herman! Sounds like all of you are enjoying Mom's retirement. Happy Sunday, kittehz!

Herman/Emma, it sounds to us Good Cats as though your human staff is getting soft in retirement. It's up to you to shape her up again! You know what to do...

It all sounds like good news. I like the idea of retiring and spending lots of time fluffing about. The cats will soon get you all organised! Cuddles to both the furry faces.

That half-lion cut is cool.. It looks good on you, Herman...

We know you will love having your mom there more - our mum is retired and the only down side is she sees us being a little bit naughty sometimes!!
Luv Hannah and Lucy xx xx

Herman, you look super handsome with your new hair cut. The apes got me clipped a few weeks ago, so don't worry the fur will grow back nice and thick.

Emma, take your Interferon sweetheart, it's good for you. Herman knows this too. I get a little bit of cat milk after I take mine!

You look great Herman, and if more treats are involved, what the heck! Hey Emma, give da Birdie a whap fur me please! Y'all have a great Easy Sunday!!!

Herman and Emma
We know your Mom is loving being home with the two of you and enjoying her new schedule. It took our Mom awhile before she felt normal after she retired. Herman you look very handsome with your new cut and Emma we hope you will continue with your Interferon.
purrs
>^,,^<
♥Abby♥Boo♥Ping♥Jinx♥Grace♥

We've been crappy bloggers and crappy visitors lately, so we missed this news! Congratulations on your retirement! I'm sure it will take a while to get a new schedule worked out, but I do hope you love it! Zoe and Fuzzy are waving their paws at Herman and Emma!

That half lion cut is quite stylish, Herman! We are glad you and Emma are getting along so well these days, and that Karen Jo is enjoyoing being retired. :)

We foresee a time soon when Herman and Emma will be curled up on the bed together. So keep a camera at the bedside Karen Jo. You wont wanna miss it!

Congratulations on your retirement Karen Jo. We hope you really enjoy yourself. You sure started off right by celebrating. I don't sleep close to Cleopatra either but we do sleep with Mom on the bed. I sleep on one side and Cleo on the other. Oh yes, when Mom leaves the closet door open Cleo goes in and checks it all out like Emma does. Hey, Herman I like the half lion look on you.