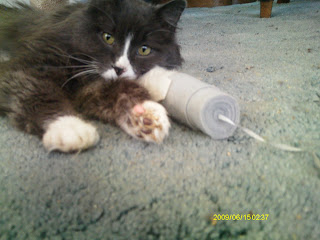 My nip syringe has made me so mellow that I finally let Mom take a picture of my one pink toe pad. You can biggify the picture to see it better. I love using my syringe for a pillow when I nap. Sigh. I was doing so well with my solid poops that Mom cut back on my medicine to see how I would do. I went back to pudding poop, so I am getting all three doses per day again. We were both so hoping that I could get off the medicine and make solid poop all by myself. Mom ran out of baby food and tried the pill shooter on me again. I let her do it, once. When she got home from work, with baby food, she tried the shooter on me again and I really fought it, so it's back to the powdered pill in diluted baby food syringed into my mouth again. I am so used to it by now that I hardly resist it at all any more.

Mom went out this morning and came home with a roast beef sandwich for her lunch. I have always turned up my nose at roast beef before, so she was surprised when I told her that I wanted some of her sandwich. She was even more surprised when I ate the roast beef that she offered me. Then Mom went out again and came back a couple of hours later, saying that she wasn't leaving me any more today. I'm glad.

Karen Jo: I had to take care of some bank business and send off some stuff from the safety deposit box to the people winding up my Mother's estate. After lunch I went to the dentist. Now I'm going to goof off, spend lots of time with Herman and blog a lot.

I am finding things interesting that I never showed any interest in before. Mom put her shopping bag on the floor last night to take stuff out of it. When it was empty, I stuck my head in it and pushed it around the kitchen floor. Then I ran into the living room, watched the bag closely while doing wiggle-butt, then pounced it and slid across the floor. That was fun. I'll have to try it again.

Karen Jo: I am so glad to see this kind of behavior in you. Bags never held any attraction for you before. I think you are feeling even better than you were before you got sick. Maybe it's because you are very sure that this is your home now and you feel comfortable trying new things. Speaking of which, thank you all for your advice on my becoming a foster to FIV+ kitties. I do think it is probably too soon to subject Herman to any stress. The shelter hasn't called yet, so maybe they are really thinking it over, too. Since Herman has both FIV and FeLV, any kitty with just FIV would be in some danger of catching FeLV from Herman. I wouldn't be comfortable taking in a foster who didn't have both, because Herman has been all over the house. Herman seems very happy as an only cat, except he hates to see me leave for work. I know that he plays while I am gone, because his toys are all moved around when I get home. I don't know that he is actually lonely for company. I suspect that he just likes having me around.

I like having you around to feed me, for sure. You gave me that canned green pea and duck again. I have already told you that I don't like it.

Karen Jo: I will keep trying it on you every once in a while. I tried giving you grated cheddar for weeks before you decided that you liked it. Now you gobble down your cheese like it's the best stuff in the world.

Actually, humans are impossible to train. They have minds of their own and a short attention span and ... well, they're just not trainable unless you start when they're babes. And still-

We are sorry you could not cut back on the meds! WE are so happy that you are playing and trying new things!

Humans are very difficult to train. Good luck with yours--I think you are doing a fine job Herman!

We can't train our humans either. Glad your poops are better.

Herman, we're glad that you are playing more and having fun!! But we're sorry you still have to take your medicine...it's for the best...

Herman, aren't bags just the funnest to play with? We destroy one in about a day around here...we just sorta love it to death.
It's good that you feel well enough to play...and that you are making solid poops. Keep up the excellent job of keeping your Mom guessing on the foods you like; it's one of our joys to mess with our Mommy's head, foodwise.

We is so glad you plays a lot Herman. Play is good! We is happy for your KarenJo too that you seems to feels better. She worries so...

Oh it is so neat to see pictures of you playing Herman. I'm so glad your feeling better and eating better. We love to play in and with bags Mom brings home from the grocery store. Cleo likes to hide in them. I like the noise they make.

And Siberian humans khan be even tougher that most others!

Herman is too cute with his syringe pillow; he looks a little nipped out=nothing wrong with that!!hehe...Love hearing about him playing with the bag, it's always fun to discover new games...kisses handsome boy...xo...Calle, Halle, Sukki

So sorry you can't cut back on the meds, but at least they appear to be helping.

Herman you are leading your Mom a merry dance, this is a the only way to train humans, to keep them guessing. Good work Herman.

FIV & FeLv are only transmissable via body fluids, as when mating or from deep bite wounds. Both virii can't survive outside of the cat, so your home is safe as far as other kitties go.

Herman you look really cheeky in that picture!

It seems that you are far better feeling now ! wonderful ! continue like that !

You are looking so good in that picture, Herman - so nice to see you looking well and bright-eyed.

Karen Jo - your mention of Herman liking his cheese: my Mom had heard that cats are actually not able to digest milk well, due to the lactose, so I wonder about things like cheese with the pudding poop issues. Maybe the vet can advise you. Hate to take away something he likes, of course.

That syringe toy is the greatest!

Herman, we hope that at some point you will be able to cut back on the meds, but in the meantime, we're *so* happy you are doing ever so much better and are being so playful. Lots of kitty kisses from us and smooches from our human!

We are glad you are playing more and are very happy Herman. It is a pity that your meds can't be cut back, but if that is what it takes to keep your poops firm, then you will have to accept it as part of your routine.

We are happy to hear you are expanding your horizons with playing more. Sorry about the PPs (Pudding Poops) again. Hoping you don't need meds anymore soon!

We're sorry to hear about your pudding poops again - hopefully taking your medicine again will make them solid once more. We're pleased you are playing more and taking over your mom's shopping basket.

Hi Herman, I'm glad you're doing better, even tho you still have to take meds. Sorry we haven't been around much lately. Mommy barely posts for me and since I don't have fingers, it is hard for me to visit around. I hope you haven't forgotten me! We have been purring for you.
I saw your comment at Angel and Kirby's. If I remember right, the Tuxie Gang had black and gray tuxies as members. You should join!

I'm sorry you get so lonely when your mommy is gone. Maybe she could get a Cat Sitter video to play when she leaves. My beans leave the TV on for me.

Herman we're sorry that the meds couldn't be cut back, but it sounds like you really don't mind too much, and for that we are grateful. Otherwise things in your house sound great, and we are so encouraged by all the playing you are doing and showing interest in new things is wonderful. Keep it all up!

Herman, I am so glad you are feeling so great now and playing around with bags. I like bags a lot. Lately I just enjoy watching Miles make a fool of himself. It is quite entertaining.

green peas and duck sounds pretty bad. I would certainly turn up my nose at that.
Why dont we just get lunch meat every day? roast beef sounds very good to me!

Oh Herman, that is such a good toe pad. You can be really proud of it...

An we wanna mention that we often love Being foods that we don't like the canned veraions of!

We love bits of beef for his sanwitches, but never canned beef. We rthink it mattewrs where it comes from...