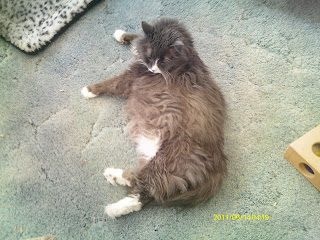 I am just relaxing on the floor.  This camera angle makes me look really fat.  Just remember that a great deal of it is floof.

Karen Jo:  And a bunch of it is fat.  You are my pudgy Herman boy.  You have been eating your weight control formula dry food.  I hope it works for you and you become not quite so pudgy.  I think you might have lost a little weight, but the last time I thought that you had actually gained.  No worries, I can tell that you are feeling really good these days.  You play ball with me in the evenings sometimes and for a longer time than you used to.  Last night you even played with your fevver-butt birdie and fished mousies out of the toybox with holes and played with them, too.  You chase Emma around and jump up on the table to check out what I am eating.  I expect to see you jumping up on the sink for a drink of water out of the faucet again any day now. 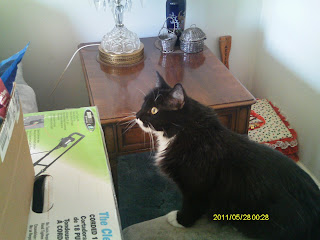 Emma: I am up on the end of the couch.  Under that table is one of my hidey-holes.  I drag Da Bird under there and tangle up the string around the table legs.  I haven't been up to any more mischief lately, for which Mom is grateful. I have actually been starting the chase game with Herman.  I will run up to him and tag him with my paw, than take off down the hall.  The game usually ends when I run into Mom's room.  Herman turns into my room then back out into the hall, expecting me to chase him back, but I usually don't.  Sometimes I do.  Mom says our record is four times up and down the hall with Herman chasing me twice and me chasing Herman twice.  It's a fun game, but it is getting too hot to play it except early in the morning and in the evenings. We are usually both crashed out for nap time when Mom goes to work.  I have been teaching Herman how to groom himself.

I already knew how to groom myself; I just didn't do it much.

Emma:  I think watching me do it has inspired you to do more grooming.

Maybe and maybe I just feel really good and want to groom myself now.

Karen Jo:  I don't know which it is, but watching you do so much more grooming makes me very happy.  When you first moved in, you were very depressed and hardly groomed yourself at all.  When you were so sick, you only groomed your backside.  Now you are grooming yourself all over and at least once a day.  I take it as a sign that you are happy and healthy.
Posted by Karen Jo at 12:57 AM

Aw Herman, Emma has been so good for you! It sounds like you two are having lots of fun together!

Herman, we are happy you are doing so well...a little extra fat is good! Haha!! And it's nice to see you and Emma having so much fun together.

Herman, you are looking great! And it sounds like you are feeling great too. I think Emma has been good for you!

Herman, we don't think for one second you are fat! It IS all floof.

Every time we read about how good you feel and how you and Emma play, we are so happy! Keep up the grooming, you don't want to have the Dreaded Water Bath.

It sounds like things are going very well in your house. What cool boxes you have there!

Of course it is floof and not fat Herman. We are glad you are playing and grooming and getting on well with Emma.

Sometimes we mancats need grooming advice. Herman, dood, you look great to me. Keep up the good work, Emma. Have a pawsome week.

stripes are supposed to make you look thinner herman...

It's nice to see you two becoming friends, and Herman, you have a little extra on the sides - if you ever get sick, you'll need that reserve. Just look at Au...

We dont mind yer floof Herman, ya earned it!

We think you are looking fantastic, Herman! And we are so happy you and Emma are getting along so well, and that you are feeling good. :)