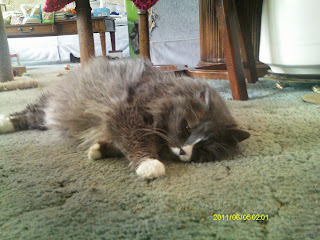 It's been hot lately, so I do a lot of relaxing on the carpet with my tummy turned toward the breeze. 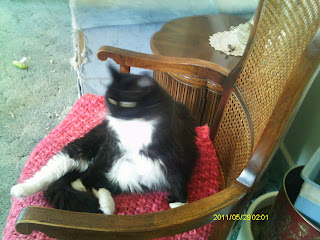 Emma:  My head is all blurry because I started grooming my chest fur just as Mom snapped the picture.

Mom has been a really bad blogger. She hasn't posted in a week.

Karen Jo:  My apologies.  We get more customers later in the day in the summer, so I have been getting home later and several days I needed to go to bed earlier because I had to get up early.  It's going to get worse, because I am going to have to start watering the yard after I get home from work some days.  I will do as much as I can.  Things should get a lot better in September.

I guess that will have to do. At least you finally cooked something good again.

Karen Jo:  Yes, I roasted a turkey Wednesday night.  I don't get you two, though.  Thursday, you couldn't get enough turkey.  Today, you hardly wanted any at all.  I would offer you turkey and you would sniff it, then just look at me.  You kept staring at me all the time I was eating, though. Each of you took one little bite, then didn't want any more.

Sometimes we want it, sometimes we don't.  I jumped up on the table to see if the stuff on your plate was better than what you were offering me.  It wasn't.

Karen Jo:  Herman has shown some interest in the toy box with the holes in it.  I showed him that I was dropping a few treats into the box and he made a half-hearted attempt to get them out, but soon gave up.

Why should I work that hard for treats, when I know you will give me one for scratching?

Karen Jo:  I have seen you fishing little mousies out of it.

Now that is fun, at least for a little while.

Emma:  I like to whack one of the balls in the box and run to the other side to see if it comes out.

Emma has started tearing up the new bird already.

Karen Jo:  She is just playing with it.  She has ripped off all the smaller feathers, leaving just the two big ones, just like she did with the old bird.

Emma:  I just played with the bird and the feathers came off.  I wasn't trying to wreck it.

Karen Jo:  I know.  I think the smaller feathers aren't fastened as well as the big ones, or, being smaller, the quills aren't as strong and they break.

We have open windows all the time now and we love it.  There was one really strong gust of wind this afternoon and it slammed the hall door shut.  We didn't love that.

Karen Jo:  Neither did I.  I put something heavy in front of that door so it doesn't happen again.  I am glad that it happened before I went to work.  If that door had slammed shut while I was at work, you poor kitties would have been cut off from both litter boxes.  It hadn't occurred to me that that door would slam shut.  I have never felt such a strong gust of wind through the house before.

Emma:  It scared me.  I went and hid for a minute, until I realized that Herman wasn't scared, so everything was all right.

It made me jump, but I have heard doors slam before.  Mom's bedroom door and the kitchen door did it last summer, until Mom got doorstops for them.
Posted by Karen Jo at 1:14 AM

Turkey!!! Yum. I wish my human cooked, instead of microwaving her dinners.

We've never had turkey - but it sounds as though you two like it so we'll have to see if mum will get some for us to try.
Luv Hannah and Lucy xx xx

Sounds like the turkey was pretty yummy, at least for a while. Happy weekend everyone!

We love turkey, sounds like you guys enjoyed a good treat!...Hope you all have a fun weekend...xoxo...Calle, Halle, Sukki

Yum, I love turkey! I hate slamming doors. My mama's niece is in a door slamming phase right now and it makes me furry nervous.

Yikes! Is a slamming door as bad as thunderboomies?
Y'know, WE would be very willing to eat some turkey, that is, if you don't want any more.

Turkey is yummy! Sometimes I don't want left-overs, either. I really prefer all my meals prepared fresh daily.MOL!