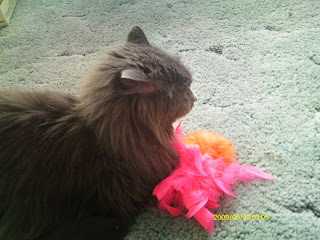 I got this great birdie with lots of feathers from Tamar and the cats at I Have Cat. I checked it out really well and pawed it and groomed it a bit, but didn't really play with it. Maybe later. Some days I play quite a bit and some days I don't. Mom can't figure out why. Mom has been acting really strange lately. She lies down and whole lot and goes to bed early a bunch.

Karen Jo: I have just been feeling really tired lately. I am going to blame it on the weather. It has been cloudy and windy and cold at night. Call it Delayed Spring Syndrome. That's why I haven't been blogging regularly.

Mom is getting too smart for my liking. Tonight she announced that it was time for my medicine and I disappeared. She got everything ready and couldn't find me. I had remembered that one time she got my medicine ready, but I was using my litter box, so she waited for me to finish. Sure enough, when she saw me in the litter box, she went away. The trouble is she soon realized that I was just lying in the box and not using it, so she came back and gave me my medicine right there in the litter box. Darn!

Karen Jo: You just have one more dose of the antibiotic that you hate the taste of so much, then you don't have to take it again until June.

Really? That sounds great. Does that mean no more syringed medicine?

Karen Jo: No, you still have to take your Centrine until your poop gets normal, but that's just a little pill and it shouldn't bother you so much. If you would just take it in the pill pocket, you wouldn't even notice it. At least, you didn't notice it before; it was the antibiotic that turned you off the pill pockets.

I won't touch those things again.

Karen Jo: I noticed. I tried to give you a plain one and you wouldn't even lick it. I could just stick it down your throat.

Don't even think of trying that. I have claws and I'm not afraid to use them.

Karen Jo: I could turn you into a cat burrito and do it that way.

I think I would rather have the syringe after all.
Posted by Karen Jo at 12:01 AM

We hope Herman continues to improve; he is a tough boy!...We hope you feel better too, Karen Jo; we're sure worrying about Herman takes a lot out of you and being tired is no fun either!...Take care and we wish you both can enjoy a happy weekend friends...xo...Calle, Halle, Sukki

Herman your furs are looking better! That's a super toy, I'm sure you will play with it exactly when you want to and certainly not because there's a camera there. You are really giving your Mom the runaround with your medicines. But we think she is smart and you will get those meds anyway!

Karen Jo, do get lots of rest, we know how exhausting it is looking after a poorly cat.

Have a great weekend

Yay Herman!
Keep your mom on her toes! I agree it is much more fun to let them chase you around the house with medicines. They eventually get all tired and then you can come back in the room and evrything is back to normal -- oops.
No, never mind, that is when she captures you.

I like your new toy, Herman!
I am hoping when Miles comes to live with me that I will get... I mean we will get some new toys!

That toy looks pawsome. We think you'll have loads of fun with it when you are all better. We're MOL @ the cat burrito comment.


Sniffie and the Florida Furkids

You are quite a challenge for your Mom, Herman. Fancy lying in your litterbox in order to postpone your medicine. You are pretty smart!

You are ManCat after my own heart. I LOVE to groom my feather toys! ~ Johnny

Good to hear your busy outwitting your Mom. Keep up the Cat work. Mommy is the expert piller around here; she's quick and we fight but it's usually over with in a second. We've bitten her but she just does the old "thumb stuff" method and ignores our mighty fangs.

We are glad you are doing well Herman. That toy looks fantastic. I might have to come and play with it!

Herman if you choose to sleep in the litterbox you must feel better, lol ! what a funny place to nap !

Herman, it is good to hear that you are still feeling OK. We hope Mom gets to feeling better. Herman you need to give her some head bumps or purrs or something. Keep taking that medicine even if you don't like it. We don't want to hear about you being sick again.

MOL and LOL.....Darling Herman, we loved the bit about you hiding in the litter box so you wouldn't have to take your medicine!!!!!

We are so happy that you are feeling better.

We continue to purr and pray for you and your mama. xxxxxxxxxxxxxx

That's a great picture Herman and I am so happy you are doing good...be kind to Mom and take your medicine, it's impawtant!

hahaha Nimbus fell asleep in the litterbox when he came home from getting "fixed" - TSB still laughs about it too! We are all so glad to hear you're doing better. It made TSB's week!

Herman,
We are sorry to be late commenting on this post but MOMMY was at some stupid thing called a convention and didn't come home yesterday, like she promised. But now she's home and can transcribe our happiness that things are continuing to improve. Keep eating and bat a toy once and a while...It helps the mommy feel better.
Snuggles,
Taz, Runt, Charles and mommy, Anna (who is in the dog house), in Illinois

We are glad Herman is feeling better. Karen Jo, I know what you mean about delayed Spring syndrome. I need to find a bottle of motivation!

The one thing all of us kitties has accepted (not liking it), is meds squirted at the back of our throuts. It always works, even when we don't like it.

You have lots of spirit, Herman, but I think it's better when you expend your energy getting better instead of fighting your humans efforts to medicate you! Seriously, you do NOT want to be turned into a kitty burrito! Maybe there is another soft treat your human can stick your pill inside of so you won't notice it, now that you have gotten wise to the Pill Pockets.

We totally missed all the news of Herman being sick!

So sorry we did not comment earlier- you have been so nice to me when I started blogging, we should have noticed earlier....

But glad nonetheless that Herman is now doing better.

We are hoping your mommmy feels better furry soon! Glad that you're doing better these days, Herman! Hoping the medicine is a little better. And as Mary Poppins ould say, "Just a spoonful of sugar helps the medicine go down."

Herman,you are not only fluffy beautiful,but also very smart!!
Hope you keep feeling better and better!!
And hope your mommy feels better soon,too!

Our mewmies been under the weather too and she's having to medicate kittens--all kinds of kitten meows come from the bathroom and we all scatter!

haha the cat burrito! that one realleh stinks, Herman. you better let your mommeh just do it.

Herman that was brilliant to lay in the litter box - we are going to try that next time we have to get pills or go to the vet!

Hey Herman - our mom wants to leave a message for your mom so we are turning the comment over to her now.

Hi Karen Jo - if Herman isn't interested in the pill pockets, you should try one of the other soft kitty treats. Floyd hated pill pockets but I was able to use I think they were whiska lickins cat treats, which are soft. You have to kind of work the pill in a bit more but if you try them and he likes them it might be a way to go. They have a couple different flavors (and shapes - some are easier to work with then others) and I know our picky boy would take his pill in them no problem. I think pounce makes a soft treat too. They aren't pill pocket soft but they could work. Also, next time Herman has to have antibiotic see if you can have it compounded into an ear gel - we did that with Kirzon because he got so bad at taking his meds (amoxi) and he doesn't fuss at all. If there is a compounding pharmacy around you, even for humans, they might be able to do it.

we're so happy that you're doing better and better, Herman! Way to go!

Our cat Moosey used to like the pill pockets, but he got wise to that whole thing the last time he had to take antibiotics...

Get lots of rest, Karen Jo. We hope you feel better soon.

My Mom had to laugh when Karen Jo caught you in the litter box and gave you your medication anyhow. You couldn't get away from her there. Just keep on getting better Herman and it takes those meds to do it. We also pray your Mom gets good rest also. Hope you have fun with your new mousie