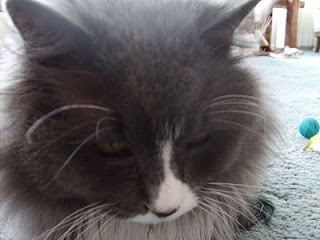 Mom was trying to get a picture of my floofy tummy, but I decided that I was very interested in the camera, so she got my face instead.  Mom has started giving me smaller portions of stinky goodness and sometimes I eat it all up.  She has started just giving me more when I ask for it, instead of putting out more when I finish what is in my dish. This seems to be working better.  Daisy suggested that I may not get really hungry because there is food out all the time and I can always nibble.  This is exactly what I do.  I rarely eat much at any one time, but I eat very often.  Mom is feeding me this way because this is the way my foster Mom told her to feed me.  Mom isn't sure if this is the best way to feed me, but it has been working so far.  I have gained a bit of weight, which is a good thing for a cat with FeLV.

Karen Jo:  I will start looking for healthier food for Herman soon, but the only healthy-type food I have found in town is Newman's Own and I haven't read the label yet.  I did order Herman some The Missing Link powder to put on his food to add some vitamins and fatty acids.  I tried to order the ingredients for Dr. Pritchard's Healthy Powder, but when I tried to order the brewer's yeast for cats a warning came up that this cannot be shipped to New Mexico.  I will try to find the other ingredients a bit later.  I want to make Herman some of the mackerel loaf, as that sounds really good for him.

I wouldn't play with Mom today.  She put on her work uniform and I think I recognized it.  I didn't want her to go back to work.  I wouldn't even play with her when she got home, though I did let her pet me some.  I just wanted my dinner.  I ate up the stinky goodness she gave me, then meowed for some more about an hour later.  She gave it to me and I ate some of it.  Other than wanting to be fed, I have been mostly ignoring her.  I guess I feel a bit sulky about being left alone again while she goes to work.  I really got used to having her around all the time.

Karen Jo:  I'm sorry, Herman, but I have to go to work.  You will get used to the routine again.  I hope you won't stay sulky long.  I miss playing with you.
Posted by Karen Jo at 1:57 AM

Sounds like you are getting your food routine down pat! It takes awhile to iron out all the wrinkles.

Happy Mancat Monday, Herman.....and yes, you can come join us in a floofy pile to keep warm anytime. xxxxxxxxx

Lots of Mommy's have to work but a lot get to stay home. We are glad you are gaining a little!

Happy Mancat Monday. We always liked our Newman's Own... It's nice that they give some profit to shelters.

Yep, we're picky aren't we, but Mommy is on the right track!!!

We are glad to hear you are starting to get a routine down - it is so tough sometimes. It is too bad your mom has to go back to work, but it is how she pays for the stinky goodness, so hopefully you forgive her soon!

As for getting healthy foods, there are a lot available online to order if you decide to try something other than the Newman's Own (since all cats are different he may or may not like it - our cats said no way to it but I know a lot of cats out there who like it). I don't understand why they couldn't ship the yeast to NM - never heard of anything like that before!

You can get Nutritional Yeast from health-food stores. We get it from Whole Foods market. It's delicious!

You look soo manly! And so soft and snuggly! Hope you find the foodies you need.

It's not fair when the Beans go off to work, but they have to do it to buy food and treats for us.

I eat a lot of meals a day.
Mom give me little bits of wet food, like two tablespoons. I eat that all up.
If she gives me more I do not eat it all.
This way food is only out when I am ready to eat.

Our V-E-T dermatologist told us to use 3V Caps Liquid for our cats. You can get it online, and the cats like it on their food. You can look it up online, and find out the ingredients, but it has fatty acids in it. This was when we first went to the dermatologist for G.T.'s itching.