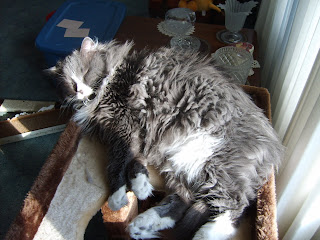 Mom has been trying and trying to get a picture of me up on my platform and she finally got one. I nap up here an lot and watch the birdies and meow at them. I also get treats when I have been up here, but I'm not sure why.

Karen Jo: I give you a treat or two when you scratch on your platform instead of on the furniture, but I'm not sure that you have ever made the connection.

Mom's ribs aren't very hurty any more and I get lots more play time. I seem to be feeling better myself lately. I went tearing around the house like my tail was on fire this evening and I haven't ever really done that before. Oh, I tear down the hall full speed when I want Mom to play with me, but tonight I was going in and out of rooms and all around the living room. Mom has been trying to get some fatty acids down me, but I have been outwitting her. First she found some fish oil with flax and borage and put it on my stinky goodness. I wouldn't even taste it. Then she put some cod liver oil on my stinky goodness and I wouldn't touch it the first time, but I did eat it when she put it on my dinner. The part I like best is now I get a sardine every morning for second breakfast. Mom thinks my fur looks a tiny bit better.

Karen Jo: I am finally getting smart and will look for cat-specific fatty acids online and order him some. Thanks to Daisy I have some names to look for. Hopefully, I can get Herman's dry fur problem under control before the lack of enough fatty acids in his diet affects the rest of his health. I feel bad that I didn't realize what the problem was earlier, but I have never lived with a cat with long fur before and I didn't know that his fur was sticking out because it was too dry.

I am going to miss Mom when she goes back to work next week. I like being fed four times a day and playing with her whenever I want and and napping with her in the afternoon, though she has pretty much stopped doing that. Mom did something weird to the couch where I like to scratch it, but I still scratch there, though it feels different.

Karen Jo: I got an idea and duct-taped the left-over ramp from your platform to the end of the couch where you scratch. It's a perfect fit. It looks a bit weird, but it will prevent any more damage to the couch and it looks better than the stuffing coming out of the slashes in the couch.
Posted by Karen Jo at 12:13 AM

sardines is good? we should make the mom buy us some!

I love sardines! And they are good for us!

I hope you can find some fatty acids that you like! The Missing Link is a dry powder that actually tastes good; you can get that on-line, and there's a feline formula.

Sardines? Hmmm, I wonder if I would like those. I feel for you being abandoned when your mom goes back to work next week. Take a look at us today and you can see how sad we are that mom left us!

Sardines?????? Hmmmmmmm wonder if Andy would eat them....the only stinky goodness we can get him interested in is salmon.

We loved your pic, Herman.

Sammy
xxxxxxx from all of us to both of you.

We LOVE sardines when Momma opens a can and shares. They are the best!!!

Are your furs dry? They look very soft and luxurious to us!
Ya gotta learn not to use the couch for scratching though.....gotta keep the mom's happy with that so we still get lots of treats!
--JB

Our dad likes sardines. We will have to ask him if we can try them.

Are sardines like real live fresh dead shrimp? I would like them, I think. The Woman wants to know if they're high in sodium, though.

I started eating Nutra stinky goodness and it's made me REALLY soft. The downside is that now the People are always trying to pet me. I'm not always cool with that...

Hi Herman! We are so far behind on visiting you! We think that sardines sound like a great idea - they are full of fatty acids and tasty too! We like to eat them on the rare occasion that mom buys them for something!

It is also good to use Daisy as a resourse because she has done a lot of research on kitty nutrition - she is great when you need the name of something to try!

Hi Herman and Mommy Karen Jo! Maybe I will try fatty acids for Cody's fur. And Toeshee has some dandruff too. I will give it a try.
I'm so glad Mommy's ribs are healing!
It's nice to be able to play together. :)
I hope your New Year is The Best!
Hugs,
Lorianna

Looks and sounds like to me that you are settled into your home and enjoyin the fine life. It's it just great?! Glad that your mom is doing better. These things just take time.

You look so cute on your perch! A big gray furry ball of love just waiting for cuddle time!! I just want to talk babytalk to you hehe.

Ohhh, Herman!!! Look at you!!! Rumblemummy is swooning!!

mmmm sardines, you lucky guy. holy moly you look floofalicious!
i'm glad your mommy is feeling better. hurty ribs can't be any fun. we are glad she is improving. Make srue you lay right on her legs so she can't get up even if she wants to!

mommy is going to ask my vet about fatty acids. my furs get dry too with dander and makes daddy's allergies flair up. maybe fatty acids will help?

Hi Herman and Karen Jo! My Daddy likes sardines but has not had any for a looooong time. I will ask him to get some so I can try them. Thank you for the idea!

Mom went back to work this week and I miss her feeding me all day. My Daddy takes care of me while she is gone but he does not feed me as often.

You are very smart to take care of your couch that way Karen Jo. Mom has a woven placement to put on the end of our couch. All we have to do now is figure out how to keep it on.

You look like a cute ball of fluff. Sardines sound interesting, maybe Tiger should have some. His fur is a little flakey. We're glad your Mom is feeling better.

You're looking very cute, Herman! We're glad to hear your mom is starting to feel better, and we send purrrrrrs to her to help her healing.