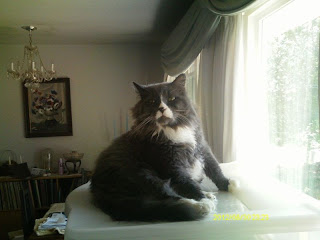 Karen Jo:  Here is Angel Herman, as he looked exactly a year ago.  His lion cut was growing out, but he wasn't in full floof yet.  I have been thinking about him a lot lately and he fits right into the subject of this post.  I thought I understood about alpha cats, but I don't think I really do.  Do all groups of cats have an alpha?  I never had this many cats before and I don't think I really know which one is the alpha in my house.  I read up on feral cat colonies and how the alpha cat is almost always the oldest healthy female.  That would be Oja in this house, but I don't really think she is the alpha.  Things were simpler when Herman was here.  He was the alpha cat from the minute he figured out that he was staying with me.  With no other cats to boss around, he bossed me around.  He woke me up for breakfast, told me where he wanted his food bowls and water bowl, let me know that the litter I was using was unacceptable and that I better change it fast, told me when it was playtime and scolded me from the bed if he thought I was staying up too late on the computer.  Emma, Spyro and Oja all acknowledged him as the head cat without any fuss.  Well, Emma fussed, but that was because she was terrified of him.  After Herman ran off to the Rainbow Bridge, Spyro and Oja basically treated each other as equals, though Spyro would eat Oja's dry food.  I felt sorry for Oja because she was on her diet and I moved Spyro's food station to up on the counter, so she couldn't eat his food.  At bedtime if all of Oja's dry food was gone, but Spyro's wasn't, I would put Spyro's food at Oja's food station.  The diet worked anyway and Oja lost two pounds.  Then came the parade of new kitties. 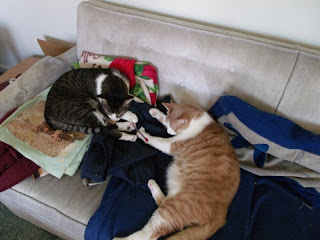 Spyro is friends with all the other cats.  He is the only one that I have seen grooming each of the other four.  Here he is hanging out with Rocio.  By the way, Rocio's hissy fit was just that. Everything is totally back to normal today.  Rocio and Bambino were having a big rasslin' match and Rocio gave Bambino a soft hiss.  I think he was daring Bambino to pounce him again.  Bambino took him up on it and the match continued.  They were having a great time together.  Rocio is friends with Spyro and Bambino.  I have seen him grooming both of them.  He used to tease Oja and chase her off her favorite chair in the computer room, but he doesn't do that any more.  Maybe it's because Horus is teasing Rocio now. 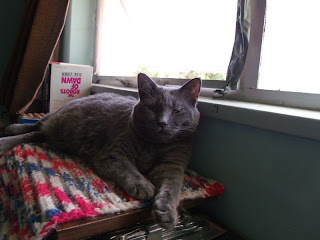 Oja is only friends with Spyro and Horus.  She wont let Rocio or Bambino get close enough to her for any mutual grooming. 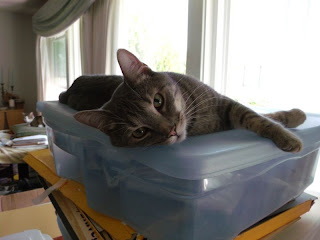 Bambino wants to be friends with all the other cats, but Oja won't let him be friends with her.  I have never seen Bambino groom another cat, though I have seen Rocio and Spyro grooming him. 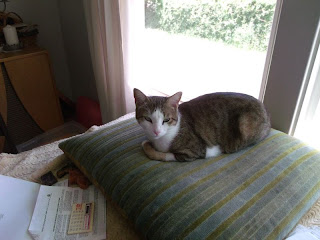 Horus is the newest addition.  He is friends with Spyro, Oja and Bambino.  He has been a bit mean to Rocio and I have never seen the two of them rasslin'.  This could be because Horus is the kitty least likely to be seen in a rassin' match.  I have seen him rassle Spyro and Bambino, but he would rather play THoE any day.

So who is the alpha cat here?  I can rule out Bamino and Rocio immediately because I have seen them defer to the older cats.  Herman commanded the respect of the other cats and no cat messed with him.  That lets Oja out, as Rocio was certainly messing with her.  On the other hand, maybe Rocio stopped messing with her because she convinced him that she was the boss.  Horus defers to Oja and Spyro, though not to Bambino or Rocio.  Neither Spyro nor Oja defer to any of the others.  I did see one thing that makes me think that Spyro may be the alpha.  Spyro was eating Oja's dry food and Oja whapped him one between the ears.  Spyro looked at her and went on eating, so she whapped him again.  He still went on eating, so she whapped him a third time.  When that didn't make him leave, Oja went off to find another food bowl.

Who do you think is the alpha or is there one?  I am just curious.  It won't change anything around here, I would just like to know.
Posted by Karen Jo at 10:50 PM

I don't think there ALWAYS has to be an alpha. Around here, with the three of us, the only obviously "beta" cat is Boodie, because she very clearly defers to me and Binga. Binga and I don't defer to NOBODY, not even each other. Especially not each other. We both think we are the alpha, really!

Hurray about getting the gophers!!! Which reminds us, TBT is sposed to spray castor oil all around the yard to seriously annoy the moles an we gotta get on him about doing that.

I don't think there is always an alpha either.They kind of take turns around here. Missy and Little Bit try to be alphas. Good to see Herman again. Take care.

We are a great meowtocracy and there are second and third in command who swap except on alternate weeks in months with 30 days where the bottom cat becomes second and all shift down.
Try that and see if it works for you

Timmy the Top Tomcat all the time

The cats who came before us had an alpha - that was Max who thought he was also in change of Mum, Emma not related but adopted at the same time from the Cats Protection League was always in second place but after Max died she became more bossy. Hannah and Lucy don't bother with who is the aplha cat - Hannah is if freshly cooked chicken is on the menu but if it's to see who has the best place on Mum's knee Lucy is the alpha.
Luv Hannah and Lucy xx xx

With us the meekest kitty is the alpha--nobody messes with our 17-year old Senior lady, Kona. Everyone defers to her! We have a couple distinct cliques with leaders and a one loner, too.

The head peep read a book years ago baesd on behavioral study of cats in Japan that concluded that cats don't have an alpha but have their own mini social structures, where each cat has its own ideas about who is above/below him/her in the social pecking order. That has usually held true around here. Pierre defers to Ashton. Ashton defers to Newton. Newton and Pierre don't defer to each other.

Abby was by far a dominant cat. She command respect and put anyone in their place when they dared question her. She was fearless. Even going so far to attack a dog when it came into her territory (inside our home. She was something. Now that she is gone, all four of the others are the same as before. It's co-equals. There is no one dominant. Although if I were to pick a leader, I would say Jinx. But it's not a role where he makes executive decisions. MOL

Well, you might have an alpha, but only you would know that by who is always the boss. We have an alpha here (Brian) and a mini-alpha (Zoe), but most of the time they get along just fine.

Truffle is the alpha kitty around here.

It's hard to know for sure...
Between Waffles and Katie, Katie WANTS to be the alpha, but Waffles is sure giving her a run for her money!
: )

Oh my, ummmmm...I am currently only kitty...does that make me alpha?? And the kitties before me had a definite lady alpha...Tasha...no one messed with that tortie when she was in a snit!

We don't think there always has to be an alpha cat. Of course, maybe your kitties think of YOU as the alpha?