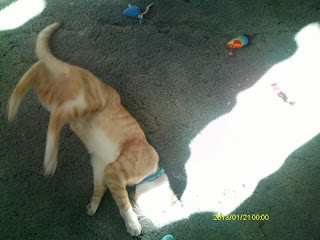 Karen Jo:  Here is Austin in action, which is how I most remember him.  There are things about Austin that I never got around to blogging about, so I thought I would do a remembrance post about him.  He was the most silent cat I have ever known.  All I ever heard out of him were the oofs and hunhs he made while rasslin'.  I never heard him meow at all.  He had other ways of communicating with me.  When he wanted to remind me that it was time to feed the kitties he would just stand and stare at me.  Every kitty here has a flat dish for canned food and a bowl for kibble.  Austin knew which ones were his and always ate out of his first.  When I would pick up his canned food dish, he would leap up and grab it.  I would show him that it was still empty and he would stand by where I would put it down full.  Sometimes he would run into the kitchen to watch me fill it, then run back to his room to wait for it.  This didn't stop him from sampling Rocio's dish as soon as I put it down and often Rocio would eat out of Austin's dish while Austin tried his.  As far as I know Austin only ate kibble out of his bowl.

I wear fuzzy plush socks to bed to keep my feet warm.  Austin thought they made great toys while they were on my feet.  He would grab at them and gently bite my toes.  He would rub his head all over them.  Once I took them off, he had no interest in them.  He never got tired of rasslin'.  Once he finished with Rocio (meaning Rocio ran off) he would look around for Spyro for another round.  After Spyro ran off, he would check to see if Oja was around.  She rarely was.  She knew what was coming and wanted no part of it.

I don't remember Austin being terribly interested in the toys on the floor, though he would play with them.  He loved the wand toys and would leap up to get them.  Da Bird is much in need of new feathers now, he played so hard with it.  He was just so full of life and fun that it is very sad to remember that he is gone.  I have some nice photos and memories of him and he might have send a present from the Bridge.  There is a new kitty in the house named Bambino.
Posted by Karen Jo at 12:15 PM

Sorry, our human, with her tired eyes, made a silly goof with the comment.

We just wanted to send hugs and purrs and say what a lovely post that was for Austin, who left far, far too soon.

And of course we want to read all about Bambino now!

That was a loving tribute to dear Austin. We all just hate his time was too brief, but he knew love in the best way possible with you.

Welcome Bambin, I can't wait to meet you.

We're all gonna miss Austin so much. Thank you for sharing, with us, a little bit more. purrs

So nice to learn some more of Austin's little ways. Bambino, welcome to the CB and to Karen Jo's house of kitties!

Awww, we enjoyed reading about precious Austin and are just really sorry he had to leave too soon...We are grateful he was lucky enough to have found such a wonderful home with you and the kitties, Karen Jo=he was happy and knew he was loved...Welcome to sweet Bambino=we have no doubt dear Austin sent you another kitty to care for and love...Big hugs and kitty kisses, still keeping you all in our purrs and prayers...J, Calle, Halle, Sukki, Mommy Cat, Daddy CAt

He sure was a little sweetie.

Austin sounds like he was such an awesome kitty! How sad he had such a short life. I'm looking forward to meeting Bambino - I do imagine that Austin sent Bambino to you!

Austin sounds like he was a lovely boy. I am sorry he had to leave so soon.

We loved the tribute to Austin! He was way too soon gone.

But we note the mention of Bambino too. Congratulations to him for joining such a good home! With a great name like that, we bet he will soon become "The Sultan Of Swat"!

Thank you for sharing some of the details you knew so well about Austin. It is usually the small details of our lives with our pets that make their life with us so memorable. If you are ready for another cat to come into your life I think it is a great way to honor Austin. Austin would approve of adopting another kitty very much. He would be honored because you were there to adopt him when he so in need of a good home & a loving Mom,
I hope your next cat brings as much joy & companionship into your life as Austin did. If you think Austin had a paw in arranging this adoption, all the better.

We are so sorry that Austin went too soon and know you will miss having him around. We hope we will be able to visit Bambino soon.
Luv Hannah and Lucy xx xx

So nice to hear a bit more about Austin. We know he made himself a place in your heart.

That was a wonderful tribute to Austin. We are so very sorry to hear about Austin's sudden passing. We send you our gentlest, comforting purrs and you are in our thoughts.

What a lovely and poignant tribute to Austin. Although his time was short, we are so thankful he was with you, where he was so loved. And we bet he DID send Bambino to you from the Bridge.

Thinking of you all...Happy Monday and enjoy the week ahead, darling friends...kisses...Calle, Halle, Sukki