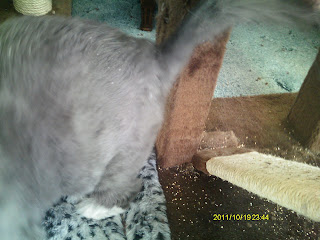 We are a day late, darn it, but Happy Birthday, Derby, and here are my 'tocks.  They are a bit blurry, but I never stay still when Mom is looking at my 'tocks.  I am afraid that she is going to wipe them, which I hate. 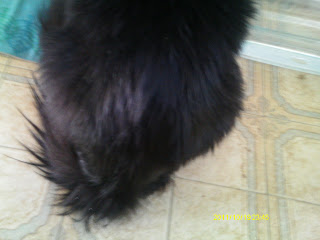 Emma:  Happy Birthday, Derby, and here are my 'tocks.  I am too lady-like to leave my 'tocks uncovered by my tail, so this is the best we can do. 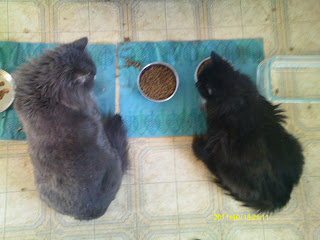 Karen Jo:  I guess this could count as a 'tocks shot, too.  Happy Birthday, Derby!  I am sorry it's a day late.  I chased the kitties around yesterday morning, getting 'tocks shots and got all ready to post, then I had a really bad allergy attack.  I didn't even get to the meeting I was supposed to attend.  After getting very little sleep for the previous two nights, then having another bad attack, I was just wiped out.  I was either coughing or couldn't hold my eyes open.  I fell asleep a little after seven and didn't wake up again until after midnight, so I called it a day and went to bed.

She was so noisy in bed the previous two nights that not even I could stand to be in the same bed with her.

Karen Jo:  As you can see from the bottom picture, Emma is not afraid of Herman.  Wednesday, she spent the whole day asleep on her snuggle on her high shelf. She got down to eat dinner and retreated to her original hidey-hole, under the corner table in her room and spent the night there.  Herman slept in her bed.  I think he wanted to keep her company.  Thursday, Emma spent most of the day on the kitchen chair with a cushion.  After I got back from running some errands, she came into my room and plopped down on the floor. This is quite unusual for her.  I picked her up and put her in my lap and she just settled down and let me pet her.  This is also unusual. When she does stay in my lap, she usually turns round and round and pats everything and kneads a little bit before settling down.  She stayed in my lap for over an hour and I only moved her because I had to use the human litter box.  Last night she slept in my underwear drawer, which I keep open for her and Herman slept in bed with me.  In the wee hours, Herman and I both woke up to Emma either having very lady-like dry heaves or coughing.  That's when I figured out that, although Emma probably stayed in her hidey-hole the first day because of Herman, Emma was really hiding out and being a sleepyhead because she wasn't feeling all that good.  That also explains why Emma hissed at Herman last night when he came up to her to give her a nose kiss.  I was about to call the vet to make her an appointment this morning, when Emma came bounding down the hall for breakfast, just the same as ever.  Now I think I will keep an eye on her for the week-end and see if she really is back to normal.  If not, I can call the vet Monday.

There were some questions about the jealousy between Herman and Emma.  Herman always gets jealous and wants attention when I have visitors or am talking on the phone.  He usually comes up to me and tugs on my pants leg, or puts his paws on my lap or meows at me to get my attention.  This was the first time that he took it out on Emma. There is very little fighting over food.  The only time it happens is when they both want to eat out of the same dish. They usually trade whaps on the head, then the interloper backs off.  If I switch attention from one of them to the other the first one always gets jealous.  I had thought that Herman had gotten over this, but he hasn't.  Petting both of them at the same time isn't easy, as they are seldom that close together.  If I am petting Emma and Herman comes up for some petting too, petting them both doesn't stop Emma from swatting at Herman.  Herman will sometimes tolerate my petting Emma, too, while I am petting him, but not often.
Posted by Karen Jo at 2:21 PM

We were hissy an jealous at first. But eventually we started nappin together, and finally even shared TBT's lap. That took months though... Ayla and Iza

We get a little jealous here once in a while, too. But usually we are okay. We're all purring that Emma really is all better.

We think your tock shots are just fine. It IS hard to get them--at least it is for our mom too.

We hope Emma was just feeling a bit off for a day or two and doesn't need a vet visit. If she's eating normally and doing her business normally, then it's all good. :-) Paws crossed!

Yeah, we're jealous. Okay, mostly it's Nicki. He definitely gets his nose out of joint when Derry gets attention, and petting us both at the same time usually doesn't work--we both end up a bit unhappy. Such is life!

We all have had coughing fits here - my human thinks that maybe it's because the air ducts need to be cleaned out! I hope Emma is feeling better and doesn't need a vet trip!

I bet Derby is enjoying those late Tocks anyway!

Nice tock shots, some lady cats are shy about showing off. Thanks for stopping by for my purrthday.

Better late than nefur is what Mommy says. I cough alot days befur I yak up a hairball. More room out here than in there! Purrs.

Great tocks!!!
Have a sweet weekend!!!

Great pics of your tocks Herman and Emma. Sounds like Mom Karen Jo is having trouble with her Kitties. My Mom has the same trouble some times too. Sure hope you don't have to go to the vet Emma. Also hope your Mom's allergies gets all better, my Mom knows all about that also. She had a bad night last night, but her problem this time was dreaming a lot. Sounds like you are going to have a mild weekend. Mom says you Herman and Emma look so cute in your header picture.

Those tock shots are great. You should see our Mom trying to get tock shots. It is really hard to do.
Could you please ask your Mom to write me an email margaretmsan@email.com. I need to contact her about the auction. Thanks
Marg

Me an Angie swat at each other sometimes too. Not so much a jealousy thing but we likes to show each other who is boss. Maybe thats some of why yoo two are doing what you are doing. Plus you are right, if Emma does not feel good then Herman may be playing on that.

This is interesting. Target is jealous of Guido in that way too. Target has to be my Kitten. At first T-man made all the fuss over Guido but I'm allowed to pet Guido more and more now as Target is mellowing.

Hope you are better. Frankly, you don't sound too hot. You've been ill these last few weeks. Hope you have time to rest and recuperate.