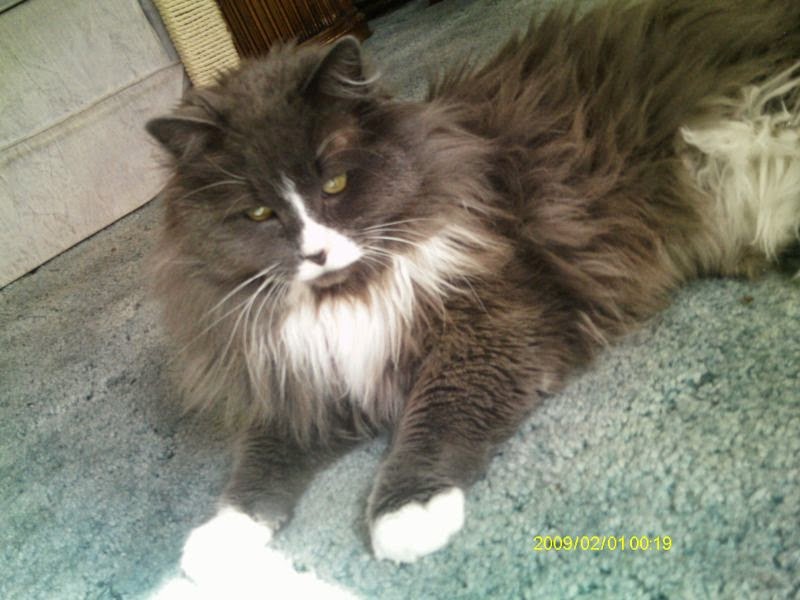 Karen Jo: This is Herman's birthday and I try to do a post like this at least once a year, so new posters who come across this blog will know what's going on here.  A new reader might wonder: "Who's Herman and why is this blog still named after him if he's gone over the Rainbow Bridge?" The main reason that this blog is still named Herman's Hideaway and always will be is that I can't bear to change it.  It is also a tribute to Herman, the founder of my present houseful of kitties.  Without him, this wouldn't be the home of FeLV+ kitties.  This is an early photo of Herman, taken shortly after he arrived.

Let me start at the beginning.  I have always loved cats, but could never have one because my mother was extremely allergic to them.  After my mother died, I decided to get the house the way I wanted it and get rid of the cat unfriendly stuff and get a cat.  It didn't work out that way.  I saw a poster with that face on it saying that Herman really needed a home, but he was FIV+ and FeLV+ so he had to be an inside only only cat.  I went home and looked up the diseases and decided that I could live with the limitations and called to say I was interested in adopting him.  First I had to pass an interview and meet Herman to see if he liked me.  He did.  His foster mother said that he had reacted more positively to me than he had to any one else who had come to see him.  A few days later, Herman moved in and stole my heart completely. 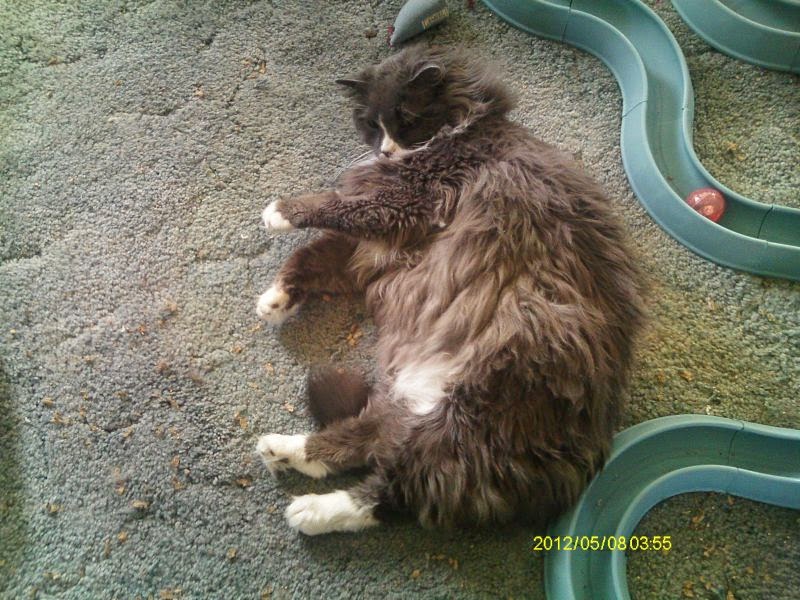 This is a much later picture of Herman taken after he had put on his weight.  He got really sick a few months after he moved in and lost a lot of weight and almost died.  After he recovered he put on quite a bit of weight and ended up at 14 pounds, as you see him here.  His ideal weight was 12 pounds.  He was a big cat.  He is  in full floof here.  He used to get the most awful matts and had to get a summer haircut every year.  Once I had adopted Herman, I could only adopt other FeLV+ cats.  Herman let me know that he wanted some feline company so he wouldn't get so lonely while I was working, so I brought home Emma one day.  That didn't work out.  Herman liked her, but she was a tiny little thing and never got over being terrified of him.  This made him unhappy and he started bullying her by backing her up against the bathtub and just staring at her.  She would scream and I would go break it up.  He also wanted her to know that he didn't appreciate her trying to take his place in the bed at bedtime.  Emma ran off to the Rainbow Bridge after only 8 months of living with us.  Then something wonderful happened.  Spyro moved in. 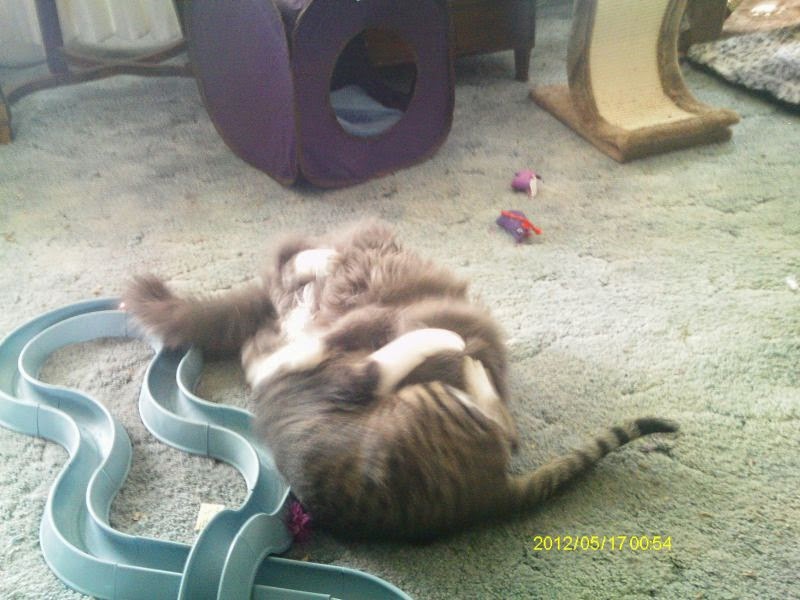 Spyro:  I didn't want anything to do with the safe room when Mom brought me home.  I demanded that she open the door and I ran into the living room to meet Herman.  We sniffed each other over and were buddies from then on.  He was my rasslin' buddy and my nap buddy and my everything else buddy.  Here we are rasslin' in the living room.  I am very grateful to Herman, because without him, Mom would never have adopted me.  A few months after I arrived, Oja moved in. 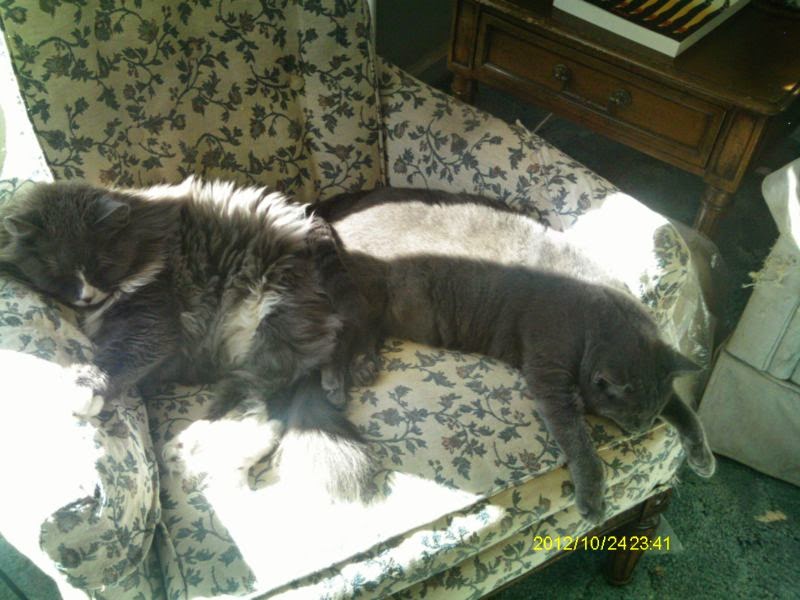 Oja:  It took me a month to get the nerve to come out of the safe room and get to know Herman and Spyro.  I had already met them, as they would sneak into my room almost every day, but I would hiss at them and Mom would eject them.  Once I got over being scared of Herman, we became cuddle buddies.  I would groom him until he was sopping wet and he would groom me, too.  This is the last good picture Mom took of Herman.  I am very grateful to Herman, also, because without him, Mom wouldn't have adopted me, either.  Herman is the reason that Karen Jo's house is the home of the FeLV+ kitties.
Posted by Karen Jo at 10:16 PM

I am glad you are letting newer readers know about Herman. He was such an awesome inspiration for you!

Sparkle has said it best. Herman was a pioneer!

What a handsome mancat Herman was. We remember him fondly.

Herman remains and always will be your wonderful namesakes. Herman still inspires and that legacy of his will always live on. You gave Herman the love and the forever home he needed to thrive in. What a wonderful gift that was to him and you...and all the other kitties that have benefited from him.

karen jo...herman's hideaway will always be his ...just as trout towne will always include dude and sauce ♥♥♥ they are all honored to be remembered; guarantee ~~~~

What a wonderful post, Karen Jo. We will always remember your Herman, and we are glad you two found each other and changed each other's lives forever. Hugs as you remember your special mancat.

That was such a nice post. We will never forget that special Herman and how excited you were when he came to live with you.

Yep, Herman left quite a legacy. Your first cat and the first of many in need of a special home. You were so fortunate to find each other.

What a special cat Herman was. We're glad that you have kept the blog in his name...what a great tribute to him. Purrs....

We unnerstand why ya keep the title the same. Purrs to all of you...

Seeing your picture of Herman today reminded us of when you brought him home (or should we say when he told you to bring him home with you!). He had a lovely life living with you and helped you to see it was your mission to bring other FelV cats to live a normal life along side you.
Thank you.
Luv Hannah and Lucy xx xx

We remember Herman so well, he was a great guy. Thanks for posting about him again! We always enjoyed the conversations you two had about things.

Herman was a very special mancat and his legacy lives on in your newer babies. Thanks you for taking in FeLV cats!

I remember Herman. How could I not? Such a handsome and sweet-looking cat.

I miss Herman. Wicked cool dood and so freaking handsome.

Happy Belated Birthday Angel Herman! So very glad your Mo posted so that newbies like us could learn about you! Thank you so much for sharing Herman's story!
Marty and Mom

We remeber Herman very well! He was a super mancat and it was a very sad day he ran to the bridge. Thank you so much for visiting us on our Gotcha day! We appreciate yoru support!

Such a lovely post...I lost my Merlin Mc Tavish to Feline aids..we had him for 5 years from diagnosis...he will always be my inspiration as Herman is yours .Hugs Fozziemum