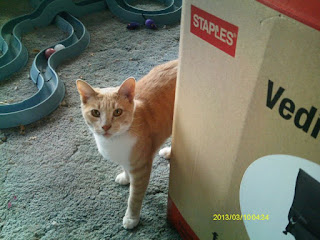 Karen Jo:  It's kind of a sad day here.  Austin would have been one year old today.  I did manage to get him a birthday present.  A week or so ago some jerk came by and stole three of my four solar lights, including the ones marking Herman's and Austin's graves.  Whoever it was didn't get Emma's because I buried her right next to the house and her light can't be seen from the street.  Today I went out and got replacements for the stolen lights.  The store didn't have the stars, so I got a sunflower for the front yard and hummingbirds for Herman and Austin.  A hummingbird was what I originally chose for Austin, so he got a straight replacement.  I hope whoever it was doesn't come by and steal them again.  I did put Herman's and Austin's much farther from the fence, so someone would have to actually come into my back yard to get them.

We still miss Austin, Rocio in particular.  Rocio misses Austin the most at meal time.  I would feed the two of them in the safe room and close the door, so they wouldn't hassle Oja while she was eating.  These days, most of the time, instead of running for his dish, Rocio just lies on the floor, looking very sad.  I have begun placing his food next to his head when he does this, or he will just lie there and Bambino will eat his Stinky Goodness.  He rouses himself to eat and shares with Bambino, who insists on sharing with all the boys.

I know you are having a grand time at the Rainbow Bridge, Austin, but we miss you down here.  I imagine you and Herman play chase and kitty rasslin' a lot, while Emma watches.
Posted by Karen Jo at 4:03 PM

That was really mean of some Bein ta steal Herman an Austin's markers!

We all miss you dear Austin, you left way too soon pal but I know Herman is happy to have you there with him. Hugs from all of us.

Austin's earthly life was a short one, but we are sure the time spent with you was very happy. Purrs.

It is so hard to grasp why one so young has to run to the Bridge, but you made Austin's life here very happy and he knew he had a home where he was wanted and loved that is all we can ever ask. Purrs to you today.

Happy Birthday Austin! I hope the party on your side of the bridge is delightful, just as you are! Keep watching over your kitty friends and peeps. Purrs and purrs.

Happy Birthday at the Bridge Austin. It was a very mean thing for someone to steal the memorial lights.

I bet there is a very nice party going on over the Bridge today. Purrs to you all-

So sad to hear the solar lights were stolen, however we will add our thoughts in remembrance of Austin.

Austin left way too young, but there is never a good time or a good age to lose one, is there? Sorry the lights were stolen and hope the replacements won't be. Hugs

Purrs to you today. Why are some humans so awful? There is no reason to steal stuff.

Happy Birthday at the Bridge Austin.

We'll never understand why humans have to spoil things.

Happy Birthday, sweet angel Austin! We didn't know you really well, but we miss you, too!

Poor Rocio! Carmine grieved really hard after Emma went to the Bridge. Have you asked your vet about an antidepressant for Rocio to get him over the hump? It may not be appropriate for him as I don't know his whole situation, but it's worth asking the vet about since he's still so sad. The vet might have a natural alternative, too, if you would like that better.

Purrs from all of us here!
Carmine, Milita, and Jewel

Belated purrs and hugs to you and Rocio as you both remember Austin.

A pox on the dumba&& person who stole the solar lights.

Dearest Austin, happy Birthday over the Bridge. I know you and Herman are playing and I hope Admiral found you so that she can be included in your day.

Mommy got leaky eyes that someone would steal the remembrance lights. I hope their conscience hurts them and they bring them back where they belong.

Love and purrs to the family who are missing you Austin.

Happy purrthday to Austin over the Bridge and many purrs and hugs to you!

Happy Birthday to sweet Austin at the Bridge!

We enjoyed your interview by JFF on Mousebreath, and it make us so happy to know your mom is giving you special kitties such a happy loving home.

Austin, we all miss you very much.

Happy birthday at the Bridge, sweet Austin. We hope you're having a grand celebration with Herman and Emma, and our Sammy. Big hugs to you and your family.

That was a terrible thing to do, there is no reason for humans to steal and that was sacred...So sorry darling Austin had to leave so soon...hugs...J, Calle, Halle, Sukki, Mommy Cat, Daddy Cat

I don't think we ever forget who's left us. I'm sorry some stupid human decided he needed those lights. We hope he stays away now.