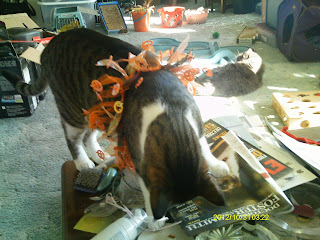 Spyro:  Happy Halloween, everyone!  Mom decided to put the Halloween necklace on me.  I am a rough, tough Mancat and I don't wear necklaces, so I stepped through it and turned it into a belt.  Mom threatened to lock me up in Oja's room if I tried to escape when the Trick-or-Treaters came by, but I behaved myself and remained free.  Mom was pretty sure I would behave because loud knocks at the front door make me nervous. 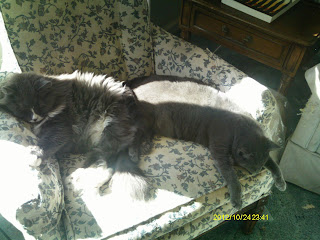 Herman and Oja:  We don't give a hang about Halloween, especially when there is a nice sunpuddle to be enjoyed.

Karen Jo:  Since the weather turned cool, sunpuddles have become prime napping spots.  I was afraid that the new heat-resistant windows would diminish their desirability, but the windows do not prevent the sunshine from warming up whatever it falls on.

Spyro has been being mean to me.

Karen Jo:  Yes, you have, a little bit.  Herman was relaxing in the above chair and Spyro jumped up to join him.  I don't know why, but Herman flattened his ears and gave Spyro some mighty growls.  Spyro appeared to ignore Herman, but Herman jumped down and found another spot while Spyro settled down in Herman's sunpuddle.  A couple of days ago I actually saw Spyro harassing Herman while Herman was trying to use the litter box.  I don't know why Spyro would do that.  Each of them has his/her favorite litter box.  Herman prefers the one in the entrance hall, Spyro likes the one in the human litter box room and Oja likes the one in her room.  I heard Herman digging in his favorite litter box, then I heard him growling, so I went to see what was going on.  Herman was crouched in the corner by the door and Spyro was standing near the litter box, but scooted away when he saw me.  Herman got back in the litter box and Spyro ran up and actually tried to bite him.  I shooed Spyro away and let Herman do his business in peace.  I wish I knew what was going on with those two.  Sometimes I see them giving each other nose kisses and butt sniffs just like they used to when they were the best of friends and sometimes they seem like they are going to get into a big fight.

Oja:  You never can tell about Mancats.  Me, I am friends with both of them, though I cuddle with Herman more often that I cuddle with Spyro.  Herman will let me nap with him in peace, but sooner or later, Spyro always wants to rassle.

Spyro:  Hey!  You pounce me lots of times when I am just walking by.

Oja:  You are the one who starts to rassle when all I want to do is snuggle with you.

Karen Jo:  We have all been doing fine.  I haven't blogged in a long time because I upgraded my internet speed and had lots of problems to begin with.  I have most of them ironed out now.  I am looking forward to being able to visit more blogs as I won't have to wait as long for blogs to load.  Yippee!
Posted by Karen Jo at 10:50 PM

Wow, wonder what's up with the boys! Ya know, there was an episode of My Cat From Hell just about like that. Two friend kitties suddenly hated each other. Jackson Galaxy had to have them reintroduce them to each other like they'd never met, weird huh?

Isn't Spyro kind of a young cat? Maybe he is growing more territorial as he grows up.

Great to see you again!

We hope you all had a fab Halloween.

You two handsome boys need to be very nice to each other...or the sis will take control!

It is good to see you again. Kirby loves to chase and pounce Angel. Then he bites her on the neck. We do not know what is going on, but are getting tired of it. WE have been considering a third kitty because Kirby did not act this way when Mac was with us.

Sounds like a trip to the vet is in order.. Could be that Herman isn't feeling well and Spyro is taking advantage of the situation..

Humans can be so silly, can't they trying to dress us up for one of their holidays? It's so nice to get an update and see how all of you are doing.

So glad to see you all yesterday. Thought it is hard to visit know that I think of you bunches. Hope you had a fun filled Halloween day.
Thanks so much for coming to the Tabby Cat Club Halloween/Fall party. I hope you made it home safely. Remember what happened at the party stays at the party.

So glad you are all doing so well!!!

Mancats are all about territory. There is some shift going on only they may know. Oja is doing great by the way. And we too upgraded to faster Internet sapped and wireless and still battling with AT&T Uverse to get wireless speed delivered all over the house, what a mess!

Happy Happy Halloween to you!

It's good to hear from all of you! Spyro, you hafta stop being so feisty!! Or at least let Herman use the box in peace.

We hope you all had a great halloween!