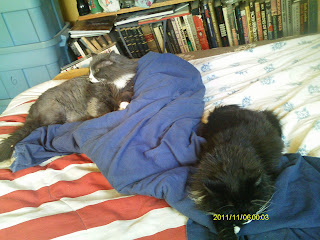 Mom took this picture of Emma and me occupying the bed together on November 6th. Don't we look peaceful together?

Karen Jo:  You weren't so peaceful a couple of days later.  I was standing at the kitchen table reading my mail and giving Emma a pet or two, with you sitting in my chair looking on.  I then went to my room and shortly thereafter head kitty fighting noises.  There you and Emma were on the kitchen floor kicking each other like crazy.  Your first real fight.  Are you really that jealous of her?

Yes.  I didn't really hurt her and let her go as soon as you asked us what we were doing.

Karen Jo:  You did let her go, but whether or not you hurt her remains to be seen.  I checked Herman over for wounds immediately and didn't find any.  Emma hid for three hours and I checked her for wounds as soon as she came out of hiding and didn't find any on her.  Emma then sat in my lap and Herman came into my room to see what was going on.  He got up in the computer chair and after a little while raised his paw, as if to swat at Emma.  Emma growled and I said, "Don't you dare!" and Herman put his paw down.  The next day it looked as if everything were back to normal.

Everything was back to normal, but you were too lazy to blog about it.

Karen Jo:  I have been feeling too tired to blog.  It looks like I have developed asthma.  I am now on a medication for it and I am feeling a bit better.  I will be back to regular blogging.

You forgot about my Gotcha Day.

Karen Jo:  I didn't forget it completely.  I knew it was coming up, but I didn't check on the day until it was too late.  I'm sorry.  Your Gotcha Day was the day I realized that I hadn't seen Emma all day.  I found her hiding under the couch and let her be.  Thursday I discovered that she was very lethargic and was lucky enough to get her into the vet that afternoon.  The good news is that her temperature, lungs and heart are all perfectly normal.  The bad news is that she could have a hidden abscess caused by a claw puncture during the fight, though the vet says that she has never seen a case of that where the cat didn't have a temperature. The really bad news is that her feline leukemia could have become active.  The vet sent me home with the pink liquid antibiotic to give Emma twice a day for a few days to see if she improves.  Today she is very weak. She doesn't fight the antibiotic I squirt in her mouth, though she doesn't seem to like it.  When I got up this morning, I found her by the water bowl in the kitchen and she had peed on herself.  This worries me very much because Herman never did that even when he was at his sickest.  I cleaned her up and put her back, but she crawled under the kitchen table.  I left her alone for a little while, but decided that she would be more comfortable in her room on the warm carpet than on the cold kitchen floor.  Her food, water and litter box are all close at hand in there.  I got her kitten food off the tall shelf and put it on the floor, then went and got her and put her near her food and water.  Herman came in to see what was going on and immediately gorged himself on the kitten food.  I let him.  I went to make sure that I had an extra dish, so I could give her some Medley in her room and Herman followed me, both out and back in.  Herman walked up to Emma and sniffed her all over, then bent over the top of her head.  I thought he was going to give her a comforting lick, but he just sniffed, then raised his paw and took a swat at her.  She dodged and scooted away from him.  I immediately evicted Herman from the room and shut the door. I brought Emma back to her food and water and petted her a little, but she wanted in her hidey-hole under the corner table.  I have been in and out several times and spent quite a bit of time with her, just reading in the easy chair.  She did come out and sit by my feet for a while, then went to her bed by the heat vent.  I was glad to see that, as I thought she would be comfortable there.  I had to leave her to do stuff around the house and when I came back, she was back in her hidey-hole.  So, Emma is back where she was when she first moved in, locked up in her room, because I can't trust Herman around her.  I will visit her often and spend time with her.  I made another appointment for her on Monday.  If the antibiotic works and she improves significantly, I can cancel.  If she stays the same or gets worse, the vet will take a blood sample to see if the feline leukemia is active.  Please purr for her.  I am very worried, because if it is the leukemia, she doesn't have the reserves that Herman had to fight it.  She has only lost a tiny bit of weight, but she is tiny herself.
Posted by Karen Jo at 9:08 PM

Lots of purrrs and purrayers for Emma!! We hope the medicine works and she feels better!!
((((((((HUGGGGSSSSSSS))))))) from your TX furiends,

Oh, we are sending tons of purrs and purrayers for sweet Emma. This is very difficult to think that her FeLV might be acting up. And Herman probably recognizes that she isn't feeling well and is picking on her. Many hugs to Emma.

Luf, Us and Maw

Oh no! Our purrs Emma. Our purrs.

Oh no. We are purring our hardest for Emma. Herman might be picking on her because she doesn't feel well. Purrs to you too, Miss Karen Jo, so that you feel better also.

Oh poor sweet Emma, we are sending our biggest purrs, prayers and our best thoughts to her for good health and for her to feel better very quickly and for harmony between Herman and her.

Oh, noes, poor little Emma! We've got our purr motors revving on high for her and are keeping her in our purrayers. We hope the medication helps her, that's it's not the leukemia.

*Kitty kisses* to her and hugs to you.

Oh sweet Emma, come on girl, fight this nasty stuff. My sisters and I are sending you lots and lots of our best purrrs sweetie.

WE sure are sending tons of purrs to Emma. We sure hope she can fight and get better. We are all crossing our paws and the donks are crossing their hooves for you too Emma. Happy Saturday to all of you.

I am very concerned about Emma too and I am purring a lot for her - PLEASE keep us posted!

We are purring really hard for Emma and hope the medicine helps her feel better.

A belated Gotcha Day to Herman - we missed you. Mom got asthma a few years ago - if you want to talk to her about it and what you are taking just email her. She feels better now.

We are sending tons and tons of purrs for Emma to feel better with those antibiotics!

Sending good thoughts and purrs to Emma. Sure is not fun not to feel good.
Thanks for stopping by the TCC blog. Always fun to visit with you.

We're sending 13 huge purrs for Emma to feel better, and soon! We suspect Herman can smell something "different" about her so he picked on her.

Sending lots of purrs and woofs for Emma!

Big purrs of comfort to Emma!!! We hope it is just a temporary thing...

Poor Emma, we are sending her lots of purrs to feel better.

Oh no, poor Emma! Mom Karen, we are purring and praying super hard that Emma will be able to fight this off -- whatever it may be.

We're also sending purrs and prayers for peacefulness for Herman, and ones of peace and hope for you.

Hugs to you all.

We are sending lots of healing purrs to Emma We hope she feels feel better very soon.

Oh no, sweet Emma... please be ok... I've got so many purrs for you, and for your mummy and brother. They must miss you terribly.

We are sending our purrs, Karen Jo.
(((Hugs and purrs)))
xo Katie & Glogirly

Oh dear! We are sending lots of healing purrs to Emma and peaceful,
calming purrs to Herman.

We are so sorry to hear this and send our loudest, biggest purrs to all of you...We are praying for beautiful Emma's recovery...love and hugs, sweet friends...J, Calle, Halle, Sukki

We are sending purrs that Emma feels beeter very soon!

Poor Emma we are sending lots of healing and comforting purrs to her.

Since she isn't feeling well we think she probably appreciates being alone in her room, with occasional visits from you. It probably makes her feel safe and she can concentrate on getting well.

Sending lots of purrs for sweet Emma. Herman may have attacked because he sensed she did not feel well - they sometimes pick on the weakest like that. Not his fault - just the way it is.

Sweet Emma all of us are sending you mega rumble purrs and we hope you are feeling better.
Purrs
Abby