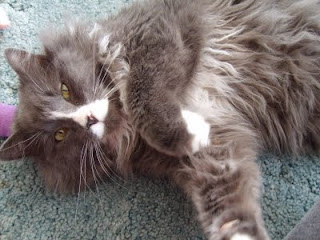 This is what I do when my Mom gets down on the floor with me and gives me pets and scritches. She wanted to catch me fully on my back making happy paws in the air, but I never stay that way long. You can see my curled paw here, though. I just love it when she gives me scritches, but sometimes she tries to take her hand away too soon and I grab her hand and give her a small bitey. Sometimes she says, "Ouch!", but mostly she just goes back to giving me scritches. I have learned some of her routine. Just before she goes to bed she checks my food dishes, gives me a few scritches, cleans out my litterbox then says, "Herman, it's bedtime!" Last night I beat her to the bed and made her get in around me. Hee-hee! I slept curled up behind her knees last night. Also on her feet. I just love that soft blanket that she keeps over her feet.

I haven't been paying much attention to my platform, so this morning when she heard the birdies outside, she lifted me up on the platform and gave me a treat. Then I watched the birdies for a while before I hopped down again. Then we played on the floor until it was time for lunch. We both got yummy chick-hen. After lunch, Mom got out that fevvers on a string thing again. I batted it a bit and it did that scary jumpy thing again. I ran and hid behind a box and watched it for a while, but didn't come out to play any more. Early this afternoon she lifted me up to my platform again and gave me head scritches. Then I saw the biggest black bird I have ever seen.

Karen Jo: It was a raven, Herman. I wanted you to see it.

I watched it until it flew away. Then I kept watching out the window for a while. This platform gets the nicest sunspot. I just lay down and enjoyed it. My Mom went away for a while then she came back and reached for that thing she puts on when she is going to leave me. I jumped down and twined around her ankles and asked her nicely not to go away, but she did anyway.

Karen Jo: I have to go to work, Herman. I would rather stay home with you, but I have to get the green papers to buy us food and toys for you.

I guess I can live with it. Tonight I ran to the door to meet Mom when she came home. She had to be very careful opening the door to keep me inside. I just wanted to greet her. She got me my dinner and gave me some scritches, then she went and sat by my platform and made some funny scratching noises on it. I went to the platform and jumped up in the little box nearest her and made some biscuits and she gave me a Temptation. I liked that and wanted another one. She made some more scratchy noises and I scratched a tiny bit on the post and she gave me another Temptation. I am not sure what is going on, but I like it.
Posted by Karen Jo at 1:10 AM

Oh Herman it is so nice to see you have your own blog. You are very gorgeous and it's great you're so happy in your new home!

Good Morning Herman... you are quite the handsome fellow & we're happy to meet-and-greet you. It sounds like you're settling in very nicely into your new fur-ever home. What a happy day it was when you and your "limerick lady" came together!

Herman, this sounds like heaven, so glad you are using the platform a little. You saw a RAVEN! Cor! they are HUGE and can be scary. Getting intot bed before your Mum is most excellent work, and sleeping behind her knees is the prime location for comfort. We can see form your latest picture you are much more relaxed now, your eyes are smiling (as well as the paws)

Herman, what a lucky boy you are! I think you are doing so well at your new forever home!

Nice happy paws Herman! That platform sounds great - lots of birdies to see, even a big one! Enjoy yourself dude!

Herman, happy paws means your happy inside! That's so great!!

You are setteling in quite nicely I must say! I think it is great that you are now beating your mom into the bed and making her fit around you. Way to go! Train her right away. Glad you two are hitting it off so well. I sent you an email with a gift for you and Karen Jo. I hope you like it. You might think it silly but if came from the heart.

We love hearing how happy you are Herman! Looks like you have it made in the shade!

Yay congratulations on having your very own blog Herman! You are so handsome you look a little like charlie chaplin, haha

I love your new platform. It is really fabulous and fancy.
I hope today you see more birdies. WE have little ones here, and them the blackbird gang.

We love hearing how you are relaxing and settling in and enjoying your new home. xxxxxxxxxxx

Herman, you are one happy boy and you make us happy too!

Herman, you are a fast learner! you will catch on the every thing before you know it!

Herman, it's so very nice to meet you! We're very happy that Karen Jo finally has her very own kitty to love and adore. You'll love it there, we just know it.

Herman! I am so glad it sounds like you are settling in so well and that you like your new home!!!

Doood, it sounds like you're training your person quite nicely! Yours must be more intelligent than mine...mine didn't learn quite so quickly and require constant reinforcement. It's quite tiring...

Aw you're such a handsome fluffball! Glad you got a good forever home!

You're a very lucky kitty, Herman! Your new mom is treating you just the way you deserve :)

Having a platform where you can watch the fevvers and lie in sunspots is very good.

Herman I am so glad you found such a great forever home. Soon you will be as spoiled as I am. Cleo nips and claws at Mom and that isn't good for her cause he skin is so thin she bleeds. She yells ouch and Cleo knows she hurt her but Mom just goes and fixes it. Mom doesn't yell at Cleo anymore cause she knows she did wrong. I get Mom with my back claws sometimes but I don't mean it but Mom swells when we do that to her. Mom knows we don't mean it and that we love her.

Herman, you are very lucky to have such an attentive mom. It sounds like she is taking great care of you. My mom used to feel guilty leaving me home all day, until she took a day off and I seemed irritated that she was making such a racket disturbing my daytime naps. So, now she understands that I need a little "me-time" during the day and knows I sleep most of the time she is at work.

Herman you are just the cutest guy ever. And we are so happy that you found this wonderful forever home, you are one lucky cat!

Temptations? YUM! Herman, maybe you like furry toys better than fev-vers. We's like dat. We has two "Da Bird" toys but wif a mousie an a crinkly fing instead of da fev-ver fing. Purrs,
Victor

Herman you are very handsome. We are glad that you finally found your Mom in your forever home. Purrs....

Herman, ya are doin great! So I wanna let ya know about a routine we have here. When The Big Thing opens the drapes nexta the kitty condo, I go pounding up there and fall ofer flat on the top, TBT gives me good rough scritches all over fer a few minits. I love that. Give that a try...